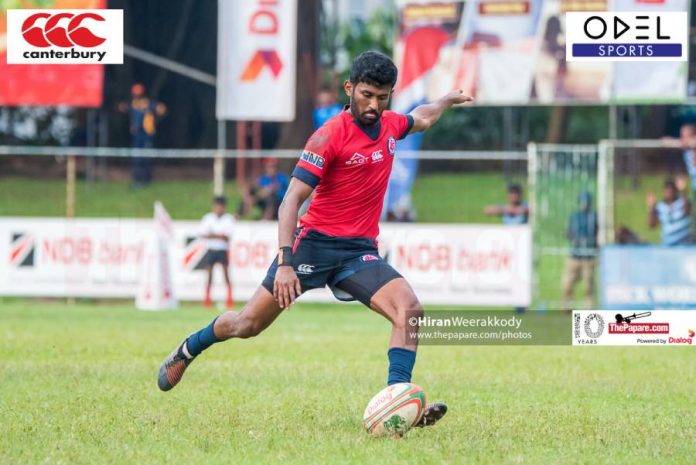 CR & FC managed to make sure that they carried forward their unbeaten streak to the New Year thanks to a strong second half performance over Army SC to beat them by 33 points to 10, in their final league fixture for the year 2019 down at Longdon Place.

Ashan Bandara of Army SC kick-started proceedings down at Longdon Place where both teams displayed an aggressive pattern of play in the first few minutes of the game. However, it was CR & FC who managed to draw first blood thanks to a successful penalty conversion in the 12th minute by their ace kicker Riza Mubarak. (CR 03 – 00 Army)

The CR lead only lasted for a few seconds as Army SC managed to register their first points on the board as Ashan Bandara gathered the ball off the restart and gave a lovely pass to Manoj Bandara, who managed to go under the post. Isuru Medagadara was spot on with the straightforward conversion. (CR 03 – 07 Army)

The quick response from Army SC did seem to have pushed CR onto the back foot down at Longdon Place. However, Riza Mubarak managed to ease the pressure through a successful penalty in the 18th minute. (CR 06 – 07 Army)

Riza Mubarak was once again in action in the 31st minute of the day’s play, as he managed to bring CR back into the lead thanks to a straightforward penalty. (CR 09 – 07 Army)

The lead only lasted for around 5 minutes as Isuru Madagedara managed to secure 3 points for his team off a successful penalty conversion. But Riza Mubarak replied with yet another penalty kick to mark the 5th lead change of the game in the dying minutes of the first half.

With CR leading by a very slight margin at the end of the first half, both teams came out hard at each other from the beginning of the second half. It was Janidu Dilshan who managed to record the first points of the second half as he collected the ball from a charged down Army kick and carried it under the post. Riza Mubarak bisected the posts to add in the extras. (CR 19 – 10 Army)

CR managed to build up on their lead in the 49th minute, as Supun Warnakulasuriya moved over the whitewash with the help of his forwards after Thusitha Senanayake was sent to the sin bin by referee Ishanka Abeykoon in the 48th minute. Riza continued to display his skills with the kicking boots, as he managed to bisect the posts off a tight angle this time around. (CR 26 – 10 Army)

With Army down to 14 men, it seemed as if CR would capitalize on the one man advantage and run away with the game, but this advantage was short lived as referee Ishanka issued a yellow card for CR skipper Omalka Gunaratne in the 52nd minute.

Sixty-three minutes into the game, Reeza Rafaideen managed to extend the lead for CR as he scored a try near the corner flag off his first touch for the entire game. Riza Mubarak wowed the crowd with his 7th successful conversion of the day, which was off a very difficult angle. (CR 33 – 10 Army)

Army SC had an opportunity to get some points on the board in the 74th minute, but missed out on the opportunity as they delayed the line out just outside the CR twenty-two. As both teams failed to trouble the scorers till the end of the day’s play, CR managed to register their 4th consecutive win in the league but should be concerned by the fact that they failed to secure the bonus point which could prove valuable in determining their final position in the points table.

The win for CR ensured that they, along with defending champions Kandy SC, bid adieu to 2019 as the only two unbeaten sides of the Dialog Rugby League 2019/20. However, with still plenty to play for, it’ll be interesting to see if there’d be a new league champion or if Kandy be able to make it 6 in a row.