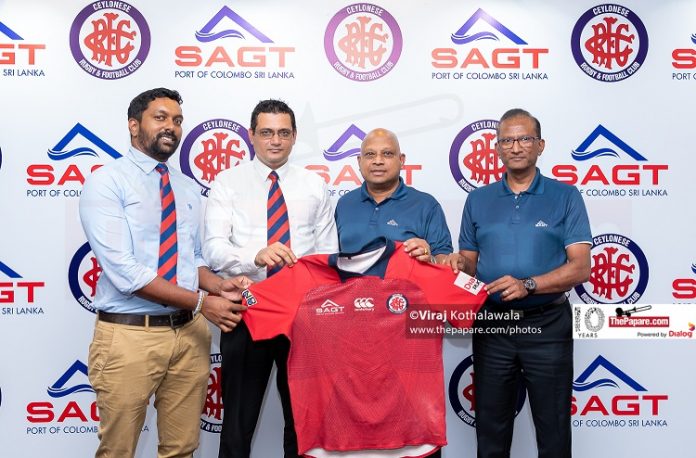 South Asia Gateway Terminals (SAGT) will continue their sponsorship with the Ceylonese Rugby Football Club for yet another year as they prepare to embark on a new journey with the Dialog Rugby League for 2019/20 set to kick off later this month.

One of Sri Lanka’s leading gateway terminals in the Port of Colombo, SAGT has been an active supporter of rugby. The partnership that started off in 2014 under the patronage of its Chief Commercial Officer Hiran Muttiah will be the sixth successive year in which the brand has been associated with the club.

“We started off to sponsor CR & FC in 2014 and now I think it’s our sixth year and we are confident that this year the club can reach greater heights” added Hiran Muttiah addressing the media briefing held to announce the continuation of the partnership.

“Like Japan who laid their foundation for a long-term objective, we are also looking at a long-term plan”

CR & FC who have now seen a new facelift to the side with new coaching staff as well as new contracted players will be title favorites going in to the season.

“We have had a major facelift in the coaching department as well as we have brought in new players and we think we have a good chance” added Jakque Perera, General Secretary of CR & FC.

Last year the club finished 4th in the league and had to exit the Clifford Cup in the quarterfinals.

However, expectations are high with the Reds with Dushanth Lewke in charge as head coach for the 2019/20 season that kicks off on the 29th of November.