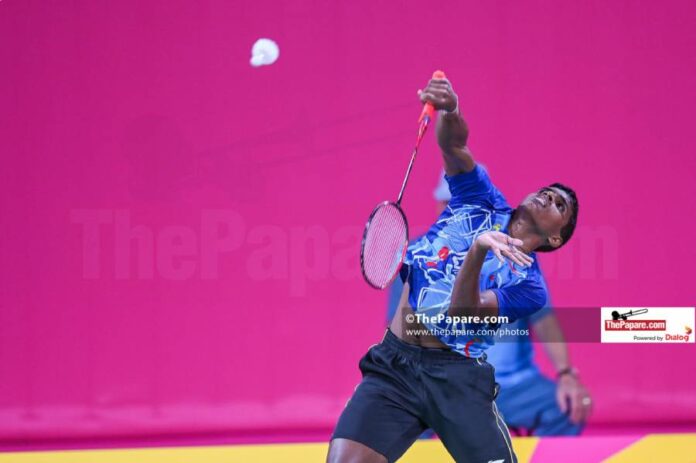 The Sri Lanka Badminton Squad had a perfect day in Brimingham, winning all but one of their fixtures on day 7 of the Commonwealth Games. Amongst the other winners of the day were the Men’s and Women’s Beach Volleyball pairs.

Dulanjana Fernando qualified for the Final of the Men’s 1M Springboard event but unfortunately only managed to finish 11th overall.

Unfortunately, 19-year-old Vidara Vidanage just could not get going against Freya Redfearn of England, going down 21/11, 21/14 in her Women’s Singles Round of 32 encounter.

After two losses in the competition so far, Sri Lanka’s Men’s Beach Volleyball pair, Malintha Yapa and Ashen Rashmitha finally got on the board with a win against St Clair Hodge and Shawn Seabrookes of St Kitts and Nevis 21/11, 21/11.

The Women’s pair of Deepika Bandara and Chathurika Weerasinghe were given a walkover in their Preliminary Round Group B tie against Suraya Chase and Phylecia Armstrong of Trinidad and Tobago, due to an injury in the T&T camp.

Rukmal Prasanna came ever so close to medaling in the 51-54kg Bantamweight event, when he came up against Abraham Mensah of Ghana in Quarterfinal 3. A win would have secured Prasanna a Bronze medal in the least, but unfortunately, he went down 3-1.

It was a disastrous final outing in the competition for Sri Lanka as they were bowled out for their lowest ever score in Women’s T20Is, being shot out for 46 against South Africa.

After the completion of the Artistic Gymnastics segments over the last couple of days, the Rhythmic Gymnastics competition kicked off yesterday. Anna-marie Ondaatje competed in the Women’s category. She finished with a total of 90.550 points in the All-Around competition, being named as a reserve for the final in 22nd place overall.

A day of mixed fortunes on the Squash courts as the Men’s Doubles pair of Ravindu Laksiri and Shamil Wakeel took away a straight sets win over Shomari Wiltshire and Jason-Ray Khalil of Guyana 11/5, 11/6. Unfortunately, their teammates on the Women’s side Yeheni Kuruppu and Sinaly Chanithma went down to the Indian pair of Sunaya Kuruvilla and Anahat Singh 11/9, 11/4.

Laksiri and Wakeel will face Cameron Pilley and Rhys Dowling of Australia in the Round of 16 later today.