After waiting for many years to see the return of a franchise-style T20 competition in Sri Lanka, the opening match of the Lanka Premier League 2020 provided a high-scoring thriller as Colombo Kings defeated Kandy Tuskers in the Super Over in Hambantota on Thursday.

Both teams were tied on 219 at the end of their allotted 20 overs. However, Kings edged ahead after scoring 16 in the one-over eliminator, while the Tuskers managed only 12.

All-rounder Isuru Udana’s superb late-hitting for Colombo Kings, 34 off 12 balls with 4 sixes, ensured the game went past midnight local time after his team required 52 runs off the 3 three overs. He even proved his invaluable experience in the shortest format with the ball by successfully defending 16 runs in the Super Over.

Earlier, after being sent into take the first lease, Kandy Tuskers got off to a terrific start as their openers Rahmanullah Gurbaz and Kusal Perera added 75 inside the batting powerplay. 18-year old Afghani opener, Gurbaz pummeled the Kings bowling with clean striking, making 53 off 22 deliveries before falling to fellow Afghan leg-spinner Qais Ahmad.

Despite playing the second fiddle in the opening stand, Tuskers Captain Perera anchored the innings scoring his highest T20 score of 87 which included 9 fours and 4 sixes. Perera was involved in two other vital partnerships with Kusal Mendis and Asela Gunaratne adding 59 and 73 runs respectively to post a formidable total on the board. Interestingly, Ahmad bowled only 3 overs, while seamer Dushmantha Chameera was the most expensive, leaking 58 runs from his 4 overs.

Opening the batting for Kings, Dinesh Chandimal set the tone during their chase as he made a fine 80 off 46 balls including 12 fours and 2 sixes. Chandimal’s efforts with the bat won him the Man of the Match award as well. He added 64 and 67 respectively with Englishman Laurie Evans and one-drop batsman Thikshila De Silva to put the Kings in a strong position. 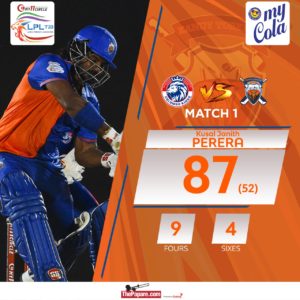 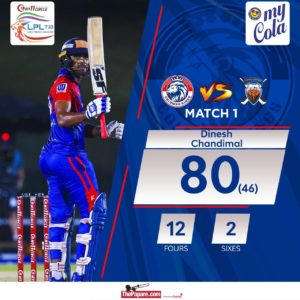 However, Afghani seamer Naveen Ul-Haq pegged the Kings back dismissing Chandimal and De Silva in consecutive balls. In the next over, skipper Angelo Mathews too fell as Tuskers clawed their way back into the game. Big-hitting Andre Russell gave a glimpse of what he’s capable of, smashing a 13-ball 24 but his dismissal in the 17th over swung the pendulum towards the Tuskers before Udana happened.

Surprisingly, the Tuskers captain didn’t employ the services of his key left-arm spinner Lasith Embuldeniya throughout the defense of 219. Also, a few dropped opportunities in crucial junctures of the match by Naveen Ul-Haq and Kusal Mendis may have cost Kandy Tuskers the match.