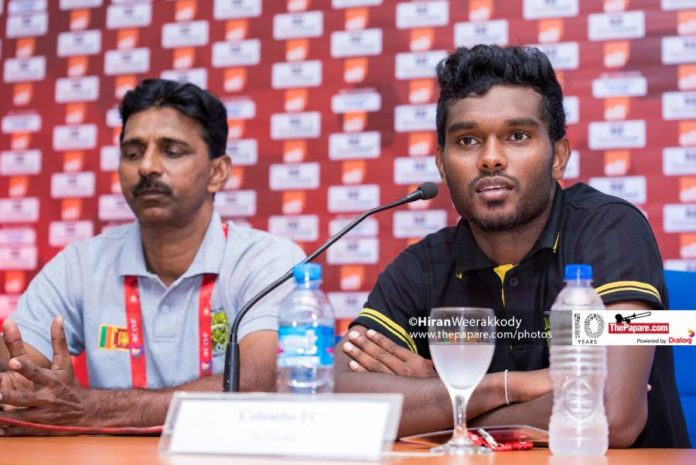 Post match press conference of the AFC Cup 2019 play off round, 1st leg match, between Colombo FC and Chennaiyin FC took place at the Football House in Colombo with both team managements at the helm.

Colombo FC played off a 0-0 draw against Chennaiyin FC at the Racecourse International Stadium this afternoon.

Speaking to the media the head coach of Chennaiyin FC John Gregory shared his thoughts.

“Everything we expected. We expected it to be tough playing Colombo FC who are playing with confidence . Fairly happy with the result. Kept a clean sheet, no away goal. Pitch helped the home team as we are used to play in lush outfields as the ball kept bouncing.”

“Experience of being in this competition, a 2 legged affair, its tough for the boys. It’s unusual for our players and it’s 180 minutes not 90 we tried to focus on that. We didn’t want to chase the game in India.”

“Lot of players found it difficult despite us being used to conditions as such. The early kick off really played a part so it was tough on our boys. Colombo FC are a tough team to play against they have been Champions for 3 seasons and 2nd this year.”

“The two central defenders did their job. Captain Mailson played as a captain should play and did well in the back.”

“Good. Gave a good fight to Chennaiyin FC, we expected more from them but they didn’t attempt much. We didn’t give them opportunities. They had good players but our players played well against experienced players.”

“We made a plan to play as we knew we couldn’t play high ball because of their height. We will get used to their conditions and look to perform well. Asikur was injured and we didn’t feel the need to get him into the game.”

“Happy for today. We worked hard as a team. We did what the coach asked us to do. That’s how the result came. We’re hoping to be better in the second leg”