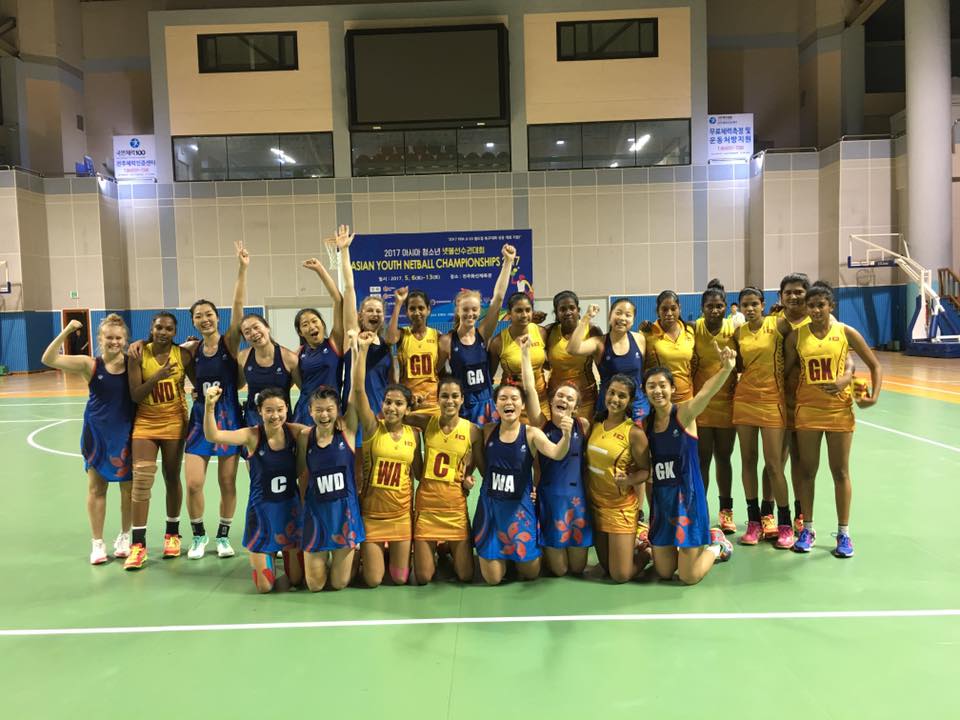 Hong Kong produced a clinical 2nd half performance to bag 3rd place with a 58-49 win against Sri Lanka at the 10th Asian Youth Netball Championship in Jeonju, South Korea.

Sri Lanka defeated Hong Kong 60-45 in the group stage but was unable to repeat the performance in the playoff match. Hong Kong on the other hand was up to the task with stellar defence that ultimately brought about the Sri Lankans downfall.

In the semi-finals, 2015 champions Sri Lanka, was swept aside 58-32 by Singapore while Malaysia defeated Hong Kong 70-40.

Singapore showcased a commanding performance to dismantle Sri Lanka 58-32 in the semi-final of the 10th Asian Youth Netball Championship in Jeonju, South Korea.

In a close 1st quarter Hong Kong edged out Sri Lanka 12-11 with Kaveena Rajapaksha scoring all 11 from 13 attempts while Yang C & A.Tupper scored 10 & 2 points each. The 2nd quarter saw Hong Kong get a 20-17 lead but Sri Lanka fought back to tie the scores 26 all at half time.

After half time Hong Kong turned on the screws to take a 36-31 lead on a 10-5 run. Sri Lanka closed the gap to 3 points but Hong Kong ended the 3rd quarter 43-38 restoring the 5 point lead setting up an exciting 4th quarter.

Though Sri Lanka was 100% from attempts, they were only allowed 12 attempts while Hong Kong had 21 attempts scoring 17 points.

The 4th quarter was a complete disaster for Sri Lanka as Hong Kong’s pressing defence forced many a turnover and misplaced passes as the winners at one time extended the lead to 12 points with scores reading 54-42.

Like in the 3rd quarter Sri Lanka were only allowed 12 attempts of which Kaveena put over 11 while Hong Kong had 15 out of 20 attempts. Rajapaksha after an uncharacteristically low 24/33 shooting success in the semi-final was at her best scoring 48/52 in the 3rd place playoff. For Hong Kong, C.Yang scored 36/45 and A.Tupper scoring 22/34.

It was once again the poor mid-court play that led to turnovers and misplaced passes which starved off Kaveena Rajapaksha of any opportunity of scoring. This was evident with Hong Kong having 79 attempts to Sri Lanka’s 55 though Sri Lanka had a success rate of 89% while Hong Kong only had 73.41%.

In the final Singapore too avenged their group stage defeat to Malaysia with a 47-43 victory to claim the 10th Asian Youth Netball Championship.