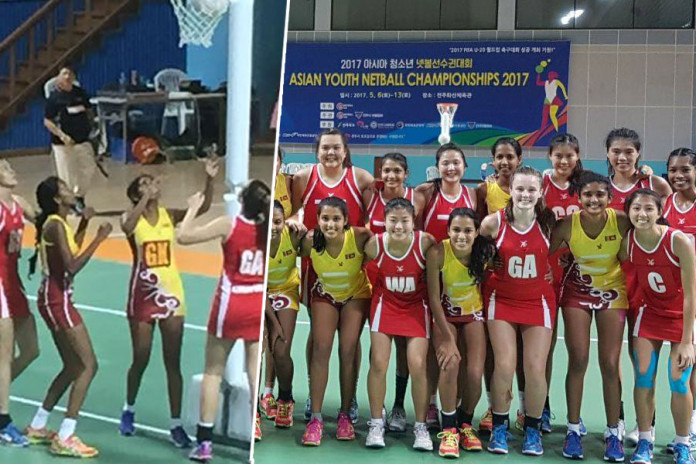 Singapore showcased a commanding performance to dismantle Sri Lanka 58-32 in the semi-final of the 10th Asian Youth Netball Championship in Jeonju, South Korea.

Sri Lanka recorded a comfortable 60-45 win against Hong Kong in a must win game to book their semi-final place in the 10th Asian Youth Netball Championship.

With the win, Singapore avenged their 69-56 loss to Sri Lanka two years ago at the same stage of the championship.

Sri Lanka came into the semi-final recovering from a surprise opening day 53-48 loss to Thailand. They demolished Pakistan 93-6 & Maldives 86-14 before defeating Hong Kong 60-45 in what was a must win game to make it into the semi-final.

Singapore had a walkover against India and swept aside hosts South Korea 108-6. However in the group’s crucial clash, they went down to 2015 runners-up Malaysia 53-50. They came back in their final group game as they had a comfortable 79-15 win against Chinese Taipei.

In the semi-final Singapore got off to a storming start and never looked back. They closed the 1st quarter 16-8. The 2nd quarter was a close encounter with Sri Lanka scoring 9 but they were unable to close down the Singaporeans who scored 11 and went into half time leading by 10 as the scores stood at 27-17.

Singapore buried the game with a dominant 14-6 3rd quarter to extent their lead to 18 points (41-23). It was much the same in the final quarter with the quarter score reading 17-9 as the game finished off with Singapore winning by more than 20 points (58-32).

For Sri Lanka the losing the mid-court battle and to a certain extent poor shooting were the reasons for the loss. Sri Lanka gave away a staggering amount of turnovers which resulted in Singapore having 76 shots on goal to Sri Lanka’s 48 – almost 30 shots less.

Tournament’s highest scorer, Kaveena Rajapaksha’s sharp shooting deserted her in the semi-final in which she was only able to score 24 points from 33 attempts. Rashmi Perera too struggled with 8 points from 15 attempts.

The other semi-final too was a lopsided one with Malaysia winning 70-40 against Hong Kong. Malaysia led 38-21 at half time.

Tomorrow (13th May) it will be re-matches from the group stage with Malaysia going against Singapore in the final while Sri Lanka will take on Hong Kong for the 3rd place playoff.