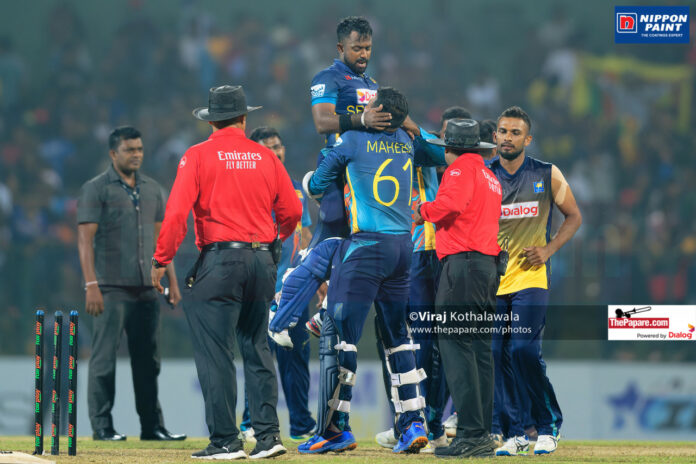 Where were you when Charith Asalanka created history at Pallekele on Wednesday?

If you were in the hills, you will remember that knock for quite some time as apart from creating history, the knock gave Sri Lanka a much-needed ten points in the World Cup Super League. Sri Lanka may still end up playing qualifiers, having wasted a fine opportunity to earn direct entry to the sport’s showpiece event. But with the likes of Asalanka in the midst, there are not many reasons to worry about the team not making it to the next World Cup.

That this is Sri Lanka’s highest successful run chase ever at home is a fact that gives you immense pleasure although the national cricket team has been blowing hot and cold in the last few years.

Asalanka’s Sri Lanka debut was last year in Durham. He was dismissed for a duck on debut. He didn’t do a Marvan as in the next game at The Oval he got off the mark but managed only three. When he returned home, his role changed completely.

For the home series against India that started two weeks after the tour of England, the team was without several seniors following suspensions for breach of COVID protocols. There was a new captain as well as Kusal Janith Perera had been relieved of his duties and Dasun Shanaka chose his men carefully and slotted Asalanka in the crucial number five slot.

In Test cricket, people say that number three is the toughest position to bat. You may have to walk out to bat in the first over itself, or you might not get a chance to bat until after tea if your openers make big runs.

Number five is a tough job in ODIs for you have to most of the time accelerate in a bid to give your team a decent score if you are batting first or you need to keep up with the required rate if you are chasing. Often you have to do the rebuilding as well if there had been a collapse and Asalanka has done it a few times.

>> What went wrong for Sri Lanka in the World Cup?

The other reason why players want to move higher up in the batting order as their seniority grows is that their numbers become a source of speculation and discussions. Not many number fives or number sixes end up with averages of the 40s while the range of 50 is absolutely rare unless, of course, you are Michael Bevan.

Playing under pressure is a special skill and it requires nerves of steel and calmness to overcome the scoreboard pressure. The last Sri Lankan to excel in that type of scenario was Russel Arnold, an opening batsman who had to fill in as a lower-middle-order batter to suit the needs of the team. Since him, the likes of Chamara Silva have looked equipped to do the job but fell on the wayside due to lack of support.

Number five and six are spots where when you come to bat usually there’s not much time left. Often the players who occupy these slots are given the cold shoulder as their numbers are not good. But there’s a reason why their numbers aren’t good. Smart ones like Arnold made sure that his average didn’t take a beating by ending up with a higher number of not-outs (43 not outs in 155 ODI innings).

Asalanka posted a match-winning hundred against the Aussies earlier this year and the upcoming series in India will be a good learning experience for him. India is a tough place to tour and if BCCI puts up a strong side instead of their second-string team, Asalanka and several other young players in the squad will benefit immensely.

Asalanka had a hundred for the taking on Wednesday night, but Dunith Wellalage stole a bit of the limelight. He smashed 31 off 21 balls and all that was not mere nudges and edges. With Asalanka struggling to run due to cramps, Wellalage hit the gaps and found the boundary on five occasions with the last hit going over the ropes as Sri Lanka needed 13 runs off the final over.

Appropriately it was Asalanka who finished things off in style, hammering a six to the deep mid-wicket boundary and helping Sri Lanka square the series.

Sri Lanka will be ruing the series result. They should have won all three games. Though they lost the 1st game by 60 runs, had one of the middle order batters hanged around they could have got over the line as 12 overs were left when they were bowled out. Then in the second game, the bowlers had done the job to keep the Afghans to a below-par score. Then rain played spoilsport.