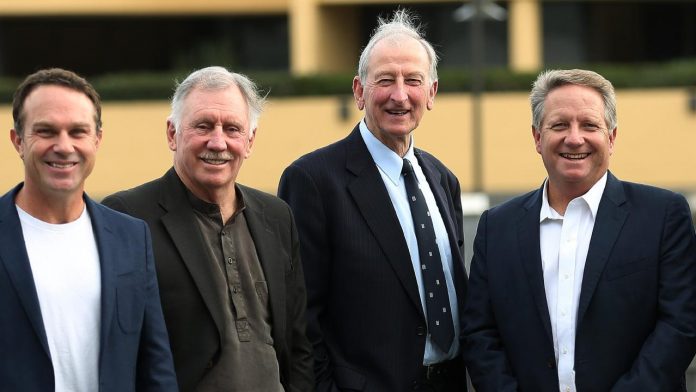 Sri Lankan cricket enthusiasts will miss some of the familiar voices of Australian cricket over the weekend when the three match T-20 series gets underway between the countries in Adelaide. With Channel Nine ending their four-decade long association with Cricket Australia, the old guard has changed.

You will no longer hear Bill Lawry screaming at the top of his voice at a dismissal with his trademark, ‘Gone!’

Neither will you hear Ian Chappell coming up with numerous anecdotes that you are so used to. There’s no better story teller in cricket than Chappell.

What are your first memories of Sourav Ganguly? Whatever it is, they cannot be good ones for…………..

Chappell was a super hero as captain and many would agree that he was the best commentator to describe the great game.

Chappell called a spade a spade. His opinions were honest and often brought him numerous troubles. When commentators are hired for ICC events such as the World Cup and Champions Trophy, one of the guidelines is to stay away from controversy. This Chappell could simply not do. As a result, he was often snubbed from ICC events.

You remember the legendary words of late Lasantha Wickramatunga to young scribes many moons ago. ‘A good journalist is someone who works with his resignation letter in his pocket.’ What Lasantha meant was that we as journalists should not compromise in telling our readers the truth and when faced with challenges should let our conscience decide the right thing even at the cost of our jobs. This Chappell did to perfection.

Throughout Muttiah Muralitharan’s no-balling in Australia, he batted for the Sri Lankans alongside Tony Greig.

The no-balling of Muralitharan was perhaps the only time Chappell and his great English rival Ian Botham saw eye to eye. Both former captains have a colourful history with their fisticuffs spread over three decades. The most recent one happened well into their 60s and after they had become grandparents!

When the second chucking controversy happened in January 1999 in Adelaide, Ian Botham was on commentary and he minced no words when he said, ‘Heard about whining Poms, now I am seeing a whining Aussie.’ His remarks were directed at umpire Ross Emerson.

Botham of course will be remembered in Sri Lanka for two things. For denying Duleep Mendis twin hundreds at Lord’s and more recently for his charity walk from north to south to help the poor and underprivileged. Like Chappell and Lawry, Botham too will no longer be commentating during English summers as Sky has ended their lucrative contract with him. Also gone is another former England captain – David Gower.

Another one who is always entertaining to listen to is Michael Holding. The genuine Jamaican got into trouble during the recent World Cup in England as the ICC appeared not too happy about him speaking his mind. Holding of course would not compromise.

Often he comes up with gems. Once when Dilhara Fernando dropped a sitter, Holding rubbed salt into the wounds saying, ‘Well, well, well. My five-year-old daughter would have caught that with her eyes closed.’

This actually fired up Fernando and you would see him spending countless number of hours during training working on his fielding and he rarely missed a catch after that. He also possessed a gun throwing arm that many Sri Lankan captains used to good effect positioning him in the deep.

Once when the commentators were changing over Michael Atherton handed the microphone to Holding with these words. ‘Talking about bowling at 100 miles per hour, here’s someone who used to do that – Michael Holding.’

‘I still do 100 miles per hour, Athers,’ Holding said. ‘The problem is, cops in London don’t like when I do that.’ Holding apparently had got a speeding ticket that week.

One is saddened that you will no longer hear the likes of Chappell and Lawry while Holding’s appearances will be limited.

The sport has to thank one man for hiring the best players as his commentators and providing them solid training in their chosen field after retirement. Business tycoon Kerry Packer changed the way cricket fans watched the game on television, making commentary more meaningful.

The sudden death of cricket stalwart Michael De Zoysa early this week has left a huge vacuum in cricket circles.

All cricket fans must watch the movie ‘Kerry Packer’s war’. The Australian Cricket Board was not prepared for change and were happy to deal with state owned Australian Broadcasting Cooperation instead of going for Packer’s Channel Nine when television rights were up for grabs.

Packer walks in for a meeting with the cricket hierarchy and with Australian cricket chiefs not looking too keenly at his proposal, the media mogul threw down the gauntlet.

Packer looks straight into the eyes of Chairman of the Board Bob Parish and Secretary Alan Barnes and tells them, “Gentlemen, there’s wee bit of whore in all of us. How much do you want?”

Cricket chiefs aren’t willing for a settlement and Packer then begins his own cricketing empire called World Series Cricket with day-night matches and coloured clothing. The rest as they say is history. After four decades, the world order has changed. Channel Nine is no longer interested in cricket and has moved onto other sports like tennis. But the impact they made will be remembered forever.