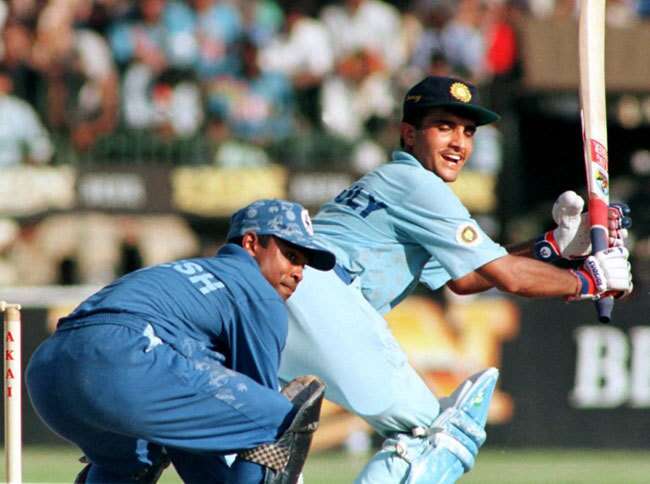 What are your first memories of Sourav Ganguly? Whatever it is, they cannot be good ones for here is a man who was a thorn in many Sri Lankan captains’ flesh be it Arjuna, Sanath, Marvan or Mahela.

Sri Lanka looked to be his favourite opponents and stats are proof for that. The man who was known as the Prince of Calcutta today has become the King of Indian cricket having been elected President of Board of Control for Cricket in India, uncontested.

>>A whitewash against many odds<<

Ganguly took a liking to the Sri Lankan attack from an early stage of his career. His biggest impact came in the 1999 World Cup in Taunton as he gave the defending champions a taste of their own medicine. That day, Ganguly looked capable of breaking every batting record, making a career best 183. His knock came off just 158 balls and contained 17 boundaries and seven sixes. The nickname ‘God on the off-side’ was coined for him that day.  Arjuna would provide his bowlers plenty of protection on the off-side knowing that was Ganguly’s strong area. Yet, he would cut forcefully and drive elegantly to hand Sri Lanka a humiliating 157 run defeat. That was the only day you saw Arjuna running out of ideas.

Ganguly would break Sri Lankan hearts again a year later in Sharjah. This time with the ball. Sanath Jayasuriya’s swashbuckling hitting had seen many bowling attacks being destroyed and he was on course to become the first double centurion in the history of ODI cricket against India.

Ganguly, the new Indian captain proved his courage when he opted to send down the penultimate over of the innings. It was a bold decision when someone is on 189 not out. Ganguly bowled one just wide of the off-stump. Jayasuriya gave the charge but failed to connect and was stumped. Many Sri Lankans went to bed that night thinking that it was a bad dream. Mind you, this was after India had been bowled out for 54 runs and Sri Lanka won by 245 runs. Yet something was not alright that night and Ganguly was public enemy number one in this part of the world.

Soon he won the hearts of local fans with his charm. Ganguly captained the side to Sri Lanka in 2001. Local cheerleader Percy Abeysekara and Indian captains have a cherished history. So much so that Mohammad Azharuddin had got him banned from entering the field of play.

Ganguly, though, embraced Percy and they became the best of buddies. Instead of heckling the Indian captain, Percy started praising him and nicknamed him ‘Prince of Calcutta’.

Indian cricket throughout has been headed by businessmen or politicians and  some powerful ones at that. The progress Indian cricket has made in the last ten years has been tremendous.

Sri Lanka played a Test match in Bombay in 2009. Since the Wankhede was under construction to host the 2011 World Cup final, the Test was played at the old ground in Bombay – Cricket Club of India (CCI) just across the road from Wankhede. The tiny BCCI office was existing in a small room of the CCI. It was so tiny and untidy you often wondered just how the world’s richest cricket board operated from there. Go and take a look now.  BCCI office has been relocated and it is a mind-blowing state of the art facility.

It will be Ganguly’s job to help Indian cricket take the next step and correct a few errors. The progress Indian cricket has made is tremendous no doubt but a court ruling after the removal of N. Srinivasan has seen them suffering a few setbacks.

Selection is a bone of contention with captain Virat Kohli having too much clout. Checks and balances which is so important for a team to progress do not seem to exist and M.S. Prasad has proved to be a weak Chairman of Selectors.

Ravindra Jadeja is a case in point. It is hard to comprehend why he was snubbed from the ODI side for two years. Jadeja was out of the equation since 2017 and made a comeback to the side just before the World Cup and had a telling impact. An economical bowler, the best fielder in the side and more than a capable lower middle order batsman, he had been left out without sane reason. Rumour is that Kohli didn’t see eye to eye with the all-rounder. A stronger Chairman of Selectors would have resisted. But Prasad gave in. It is Ganguly’s imperative to make selections transparent.

Ganguly’s rise has been meticulous. A few years ago he was elected as President of Bengal Cricket Association. Over the years, he has worked himself up to top post of the BCCI. Don’t be surprised if he goes onto head the International Cricket Council as well. And you heard that first in this space.