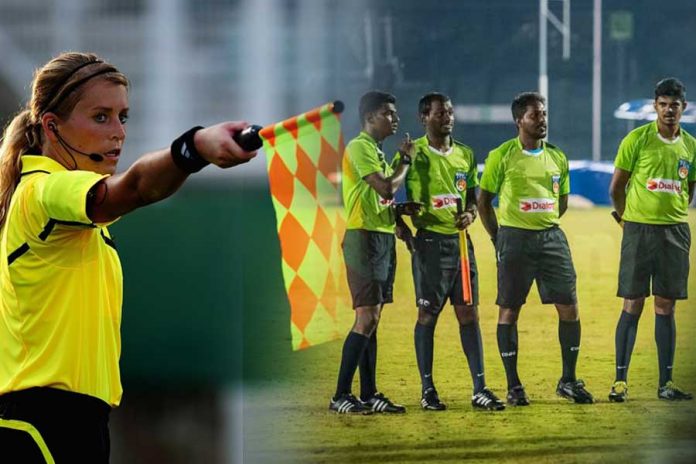 The Dialog Champions League 2018 match week 13 fixture between Super Sun SC and Renown SC was abruptly called off after the team that conceded the goal claimed that the scorer was off-side and walked off the field of play.

The Football Federation of Sri Lanka (FFSL) has taken swift..

The incident occurred in the 69th minute. Dimuthu Priyadarshana sent out a long ball towards the Super Sun goal where Dilip Pieris was lurking in an off-side position. Behind the defense line, Dilan Madushanka made a run, beating the off-side trap, towards the path of the ball.

The ball passed close to Dilip Pieris, who was still in an off-side position, and went to Dilan Madushanka, who collected the ball and took it towards the Super Sun goal.

The Super Sun defender did well to block the shot from Dilan, however the rebound fell to Dilip Peiris, who was now in an on-side position, and he scored the third goal for Renown.

The assistant referee and main referee deemed Dilip Pieris ‘Not Interfering’ with the play, and allowed the goal to stand, which led to the Super Sun players confronting the match officials.

The team management then got involved and the situation escalated to a level where the Football Federation of Sri Lanka (FFSL) officials and security had to safe guard the match officials.

The Super Sun management indicated that they did not want to continue the match, despite the FFSL trying to restart the game. Time ticked by and the game was eventually abandoned and an inquiry is currently taking place.

This is not the only time a game has come to an abrupt halt in recent times in Sri Lankan Football. Even schools’ football matches have had similar incidents in the recent past. The root cause of the trouble is awareness or the lack thereof!

Many a fan in the local football arena is not aware of the Off-Side Law (Law 11).

The International Football Association Board is the governing body who set up the Laws of the game for Football. It comprises the founding boards of English FA, Wales FA, Scottish FA, Northern Ireland FA and FIFA.

To elaborate the law further as published on IFAB.

A player is in an offside position if;

A player is not in an offside position if level with the;

A player in an offside position at the moment the ball is played or touched by a team-mate is only penalized on becoming involved in active play by;

The above detailed law can be simplified as;

‘Interfering with play’ – Playing or touching the ball passed or touched by a team-mate.

‘Interfering with an opponent’ – Preventing an opponent from playing or being able to play the ball. For example, by clearly obstructing the goalkeeper’s line of vision or movement. Making a gesture or movement which, in the opinion of the referee, deceives or distracts an opponent.

To simplify the rule exceptions are in place such as;

With the new change;

If a Player returns from an off-side position to an on-side position, is deemed off-side if the player gets involved in the play before the ball is being touched by any other on-Side player.

This seems to be confusing for lot of the Local football fans, players and to certain extent coaches too.

The new rule is established to have the game flow with less interruption as a player can be in an off-side position. Even if the ball is played in his direction he or she will not be penalized until he or she gets involved in the game. The defending team has the opportunity to continue play and gain possession of the ball.

With the VAR (Video Assistant Referee) being used in the Spanish and Italian League as well as the English FA cup, the referees are now being given the advantage of checking back on their call. However Off-Side alone cannot be consulted on with VAR.

The three points which VAR can be consulted on are;

If a goal is scored and the referee or the VAR team is in doubt of an Off-Side a check can be made by the main referee on a screen placed close to the center line. This too has not been helpful on some occasions in the European leagues as the decision must be made by the Main Referee and not by the VAR team. 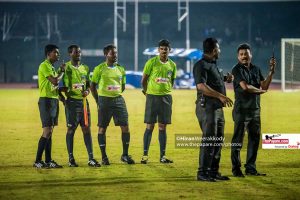 Having VAR in local football is not practical at the moment and for the time being the Assistant referees have their work cut out as the supporters and club management will be in their ears throughout the 90 minutes calling for every single move as Off-Side.

The Football Federation of Sri Lanka too has a great role to play in developing the quality and the standard of match officials as well as using technology whenever possible.

Spectator awareness to the laws of the game is not the obligation of FFSL however educating the Players, Team Management and Match Officials is the sole responsibility of the FFSL and if done right, we could avoid such situations.