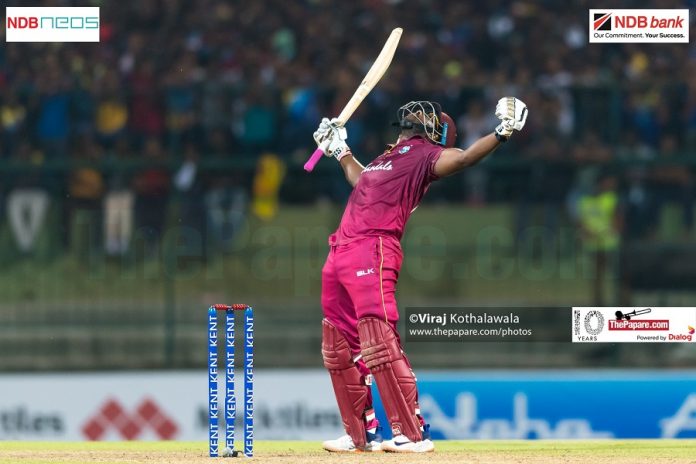 A full house at Pallekelle witnessed a stunning display of cricketing excellence on Friday as West Indies swept the two match T-20 series to complete their tour of Sri Lanka that contained three ODIs as well.

Tickets were sold out and the city of Kandy came to a standstill Friday night as all fans headed to the ground to get a glimpse of action. The West Indies have taken six hitting to a different level and they just don’t clear the ropes but hit them either out of the ground or into the stands. The ball had to be replaced twice on Friday with Andre Russell being the chief culprit as he cleared the boundary six times. He made 40 runs that came off just 14 deliveries with a Strike Rate of nearly 300.

While games that go down to the wire are thrilling to watch and spectators love them, it is also draining on players and they will be better off taking a couple of days off before refocusing on the challenges against England in the longer format of the game.

There is little doubt that the Windies will be the team to watch out for during the T-20 World Cup in Australia later this year. They have got boundary hitters, bowlers who generate serious pace (a vital ingredient in Australia), crafty spinners and a side that fields exceptionally well. On top of it all, they also have the charming leadership of Kieron Pollard, one of the nicest men to play the great game.

On Wednesday, Pollard attended the post-match media briefing after West Indies had cruised to a comfortable win. After his media work for the day was over, he spent time posing for photographs. Then just before leaving, he shook hands of everyone and said, ‘England won’t be shaking your hands boys!’

Fans hate to see their team losing. But when the defeat is against West Indies, they don’t actually mind. One thing is that the Caribbean sides of the years have been great ambassadors of the sport and then they play the game in the right spirit. Obviously, there are a few characters too like Sheldon Cottrell, whose salute every time he picked up a wicket will be copied by locals soon.

After the second T-20 International, as the fans gathered outside the West Indies dressing room, you could see the players throwing away their match kits. The fans loved this gesture and with kits running out, the tourists then starting throwing away their training kits and finally cricket balls. This was going on for more than an hour after the game was over and the West Indies had to eventually stop – not sure whether they had run out of stocks or security detail urged them to vacate the venue soon as traffic was building up outside the ground.

Sri Lanka dominated the ODI series winning all three games while the West Indies had the upper hand in the T-20 leg of the tour. They are in popular demand in franchise cricket all over the world and one thing that has stood out is their power hitting.

Two decades ago, players drifting away from cricket to basketball in the nearby United States was pointed out as the main reason for the decline in West Indian cricket. The emergence of franchise cricket put an end to it as money poured back in to the sport and the incentives were there for professional sportsmen to choose cricket as a career.

Take a look at someone like Andre Russell. The first time he played for West Indies was in Sri Lanka way back 2010.  It was as a Test cricketer that he represented the West Indies first and he shared the new ball with Kemar Roach in Galle – the famous Test match where Chris Gayle smashed 333. Russell batted at number ten in that game. But soon he realized that franchise cricket was mushrooming and then personally employed a power hitting coach to develop his ability to clear the boundary.  Look how far he has come now. Some of the shots that he played at Pallekele were worth not six but 12. He has fine tuned the art of boundary hitting. Carrying a significantly heavy bat with about six grips on it, there is quite a bit of gym work that has gone to his batting as well looking from outside.

The other thing about the West Indians, particularly the Jamaicans, their remarkable athleticism. The catches they took, their impressive running between the wickets and the run outs they effected were sensational to watch. Fabian Allen, Andre Russell, Oshane Thomas and Rovman Powell are all Jamaican boys and there is a bit of Usain Bolt in them.