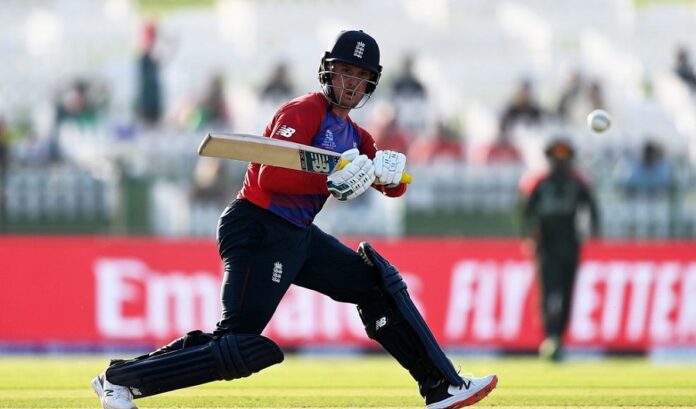 England went to the top of the table in Group 1 even as they consigned Bangladesh to their second loss in the Super 12 stage of the ICC Men’s T20 World Cup 2021.

England’s bowlers produced their second stellar performance of the tournament to restrict Bangladesh to 124/9, before Jason Roy, in his 50th T20I, made short work of the chase.

Roy’s half-century helped England complete the chase in 14.1 overs with eight wickets in hand at the Zayed Cricket Stadium in Abu Dhabi.

Spinners Moeen Ali and Liam Livingstone shared four wickets between them, while Chris Woakes, who took the new ball, was economical with 1/12 and Tymal Mills scalped three at the death.

Just as in their opening game, Eoin Morgan’s decision to throw the new ball to Moeen, the off-spinner, in the Powerplay worked well after Bangladesh chose to bat first.

While Moeen matches up better against the left-handers, it was right-hander Liton Das who fell to him first.

Das used his feet to come down the pitch and strike back-to-back fours in the first over, but fell to a straighter delivery when Moeen returned for his second. Attempting a slog sweep, he top-edged to be caught at deep backward square.

The very next ball, Mohammad Naim skipped down the track but failed to middle the ball, handing mid-off a simple catch.

Moeen’s new-ball partner Woakes then sent the in-form Shakib Al Hasan back, when Adil Rashid ran back from short fine leg to take an excellent catch.

Bangladesh were firmly on the back-foot after the first six overs at 27/3 when Mushfiqur Rahim and skipper Mahamud Ullah provided the Tigers a period of stability.

Mushfiqur was especially strong behind square and the duo enjoyed a couple of good overs against the seamers, to add 37 in 22 balls.

The introduction of the spin of Liam Livingstone broke the stand, with an England review confirming that Mushfiqur was trapped in front trying to sweep.

Amid of flurry of wickets, Nasum Ahmed (19* off 9) targetted the short boundary to smash Rashid for a couple of sixes and a four to add vital runs. But a tight final over from Mills re-established England’s supremacy in the game.

England were never under pressure in the chase. Teams have targetted their opening pair with left-arm spin. However, the strategy didn’t work too well for Bangladesh.

Roy got going first ball with a cut shot for four off Shakib, before punishing Mustafizur Rahman for two fours on either side of the square.

Jos Buttler went over Shakib’s head for the first six of the innings, but fell to Nasum Ahmed attempting another big hit.

That did little to affect Roy’s flow, though, as he and Dawid Malan motored along.

The duo added 73 for the second wicket, off just 48 balls. The bowlers leaked runs when they went full or short.

Roy brought up his fifty with a six down the ground off just 33 balls, and then added to his tally of maximums with a cheeky scoop.

He fell trying to repeat a similar shot, but with only 13 runs needed then, the wicket was academic for Bangladesh.

The Tigers, who have lost both their games so far, have their hopes of progressing past this stage hanging on a thread.