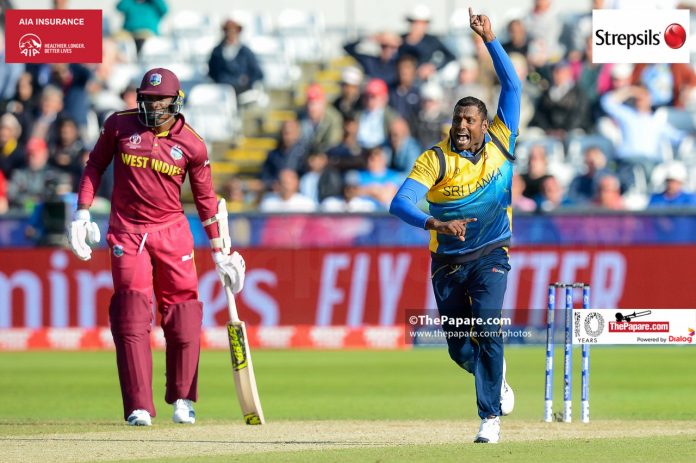 When the British High Commission in Colombo offered Angelo Mathews a scholarship in 2006 to play league cricket in England, there was a lot of excitement. Everyone had followed Mathews’ steady rise in cricket so closely from the age of 14. Not many players get the opportunity to feature in two Under-19 World Cups. But Angelo did and played his second Youth World Cup as the captain. He was the star performer of the side and there was little doubt that Sri Lanka were grooming the next version of Jacques Kallis.

In England, Mathews, representing Stanmore, was the cynosure of all eyes. The generous Siva Raja, an old boy of Royal College who runs a cricket equipment business in St. Albans just outside London, offered him part-time employment too. Mathews’ name featured heavily in the wickets and runs column for Stanmore. The national cricket team was in England during that summer and Head Coach Tom Moody would take note of this emerging talent. Soon, he would be fast tracked into the senior side although Moody would have left the job by then.

Read More:‘I haven’t been bowling at all for eight months’ – Mathews

Mathews was a godsend for Sri Lanka. Like Kallis, batting was his strength. But he was a handy bowler, often sharing the new ball with Lasith Malinga. More than pace, he was on the money when it came to accuracy and his presence in the side was of immense value.  Often, he would send down ten overs in an ODI. His four overs in a T-20 International were a sure thing. This allowed Sri Lanka to play an additional spinner against certain opponents or when the situation demanded, to play the additional batsman. Thanks to the presence of Mathews, Sri Lanka were making steady progress, particularly in white ball cricket.

Former skipper Kumar Sangakkara in his Legends interview explained so cleverly how injury to Mathews prior to the 2011 World Cup final disrupted the team combination.  It was a massive drawback.

Injury became a frequent thing with Mathews. He missed the Test leg of the tour of England in 2011. He did make a comeback for the second leg of the tour. There were a few murmurs as he wasn’t named vice-captain to T.M. Dilshan. Instead, a total outsider was given the job and it backfired as Dilshan missed the opening T-20 in Bristol due to injury.

Sadly, the full potential of Mathews as an all-rounder was never seen as he broke down frequently.

Equations in cricket sometimes change in funny ways. The very people who argued that Mathews needed to give up bowling in order to prolong his career, threw down the gauntlet a few months ago demanding that he needs to qualify as an all-rounder to represent Sri Lanka again in T-20s.

It doesn’t help players when they hear different voices in very short spans of time. Maybe someone who is mature like Mathews is able to handle it but pity the young players who must be feeling lost. That is why you need to have continuity in whatever you do. Did you know that in 2019 alone we had four different Batting Coaches? The year started with Tilan Samaraweera and ended with Grant Flower. In between we had Jon Lewis and Avishka Gunawardene.

To his credit, Mathews has taken up the challenge and come out on top of it. The next step now is to execute it in the middle in the high-pressure scenarios. Ironically, it was during a tour of India two years ago that Mathews hurt his hamstring while bowling. The injury kept him out for months. It happened during the second T-20 International in Indore. Isn’t it strange that the second game of the three match series this time around too will be played in Indore?

Whether he bowls or not, Mathews picks himself as a batsman alone. There aren’t many Sri Lankans who are fit to hold a candle to him when it comes to batting.  He is capable of both holding one end together when the chips are down and then accelerating when the situation demands.

This is not to suggest that everything is tickety-boo in Mathews’ game. He obviously has to work on his running between the wickets while his fielding is a far cry from when he started a decade ago. But the other side of the coin is that you cannot single out Mathews when it comes to fielding. Not many Sri Lankans are setting the world on fire when it comes to excellence on the field and there needs to be definite improvement made in this regard.

One of the battles that would have been interesting to follow is Mathews vs Rohit Sharma, with the Sri Lankan having the wood over the Indian opener of late, but unfortunately Sharma has been rested for the series. Mathews versus Rohit. Lasith versus Virat.  That would have been a fine way to start 2020.