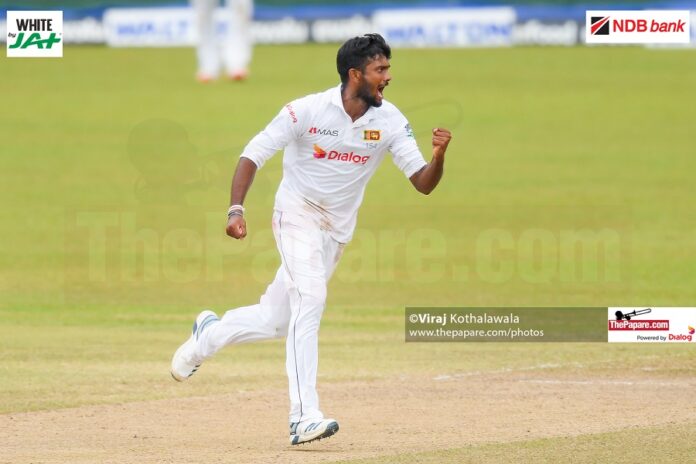 Ramesh Mendis and Praveen Jayawickrama picked up all 5 opposition wickets to fall on day 4 of the 2nd Test between Sri Lanka and Bangladesh as the hosts drew closer to their 1st Test win of the year.

The day was cut short due to bad light once again, but at stumps, Bangladesh (177/5) were needing a miracle to save the Test, still 260 runs away from the target and with only 5 wickets in hand.

Sri Lanka came out to bat on day 4 with their intentions clear. They were looking to get as many runs as possible in as short a period as possible. As such, the incoming batsmen had clear direction as to what needed to be done. The hosts lost Angelo Mathews early and 3 more during the session but got the run-rate up above 4 runs an over as Dhananjaya de Silva, Niroshan Dickwella and Pathum Nissanka all chipped in with useful cameos.

Skipper Dimuth Karunaratne looked to be in the form of his life as he stroked 66, his 4th consecutive 50+ score in his last 4 innings. He also took his series run tally well past the 400-run mark.

Sri Lanka inexplicably batted on after lunch, with the declaration finally coming with the dismissal of Suranga Lakmal as they set the visitors a target of 437 to win.

Ramesh Mendis (3/86) and Praveen Jayawickrama (2/58) were always going to be the keys to Sri Lanka’s push for a win and the two youngsters both had a decent day on the field, picking up all 5 wickets to fall in the Bangladeshi innings.

Mendis was wayward and inconsistent throughout his early spells, but still managed to grab the 3 most crucial wickets – those of Tamim Iqbal, Mominul Haque and Mushsfiqur Rahim. The off-spinner was particularly impressive later on in the day, as he got the ball to rear up off a good length while also getting a considerable amount of spin.

Jayawickrama was a picture of patience and managed to snag the wickets of Saif Hassan and Najmul Hossein Shanto, taking his wicket tally to 8 in the game. He could record the best figures by a debutant in a Test match, if he manages to grab another, with the current record standing at 8/44 by Akila Dananjaya, also against Bangladesh.

With the surface offering considerable turn and bounce, standing umpires Ruchira Palliyaguru and Kumar Dharmasena have been under the microscope. On day 4, there were a total of 7 decisions reviewed, with 3 overturned. In total, there have been 7 decisions overturned in the game so far.