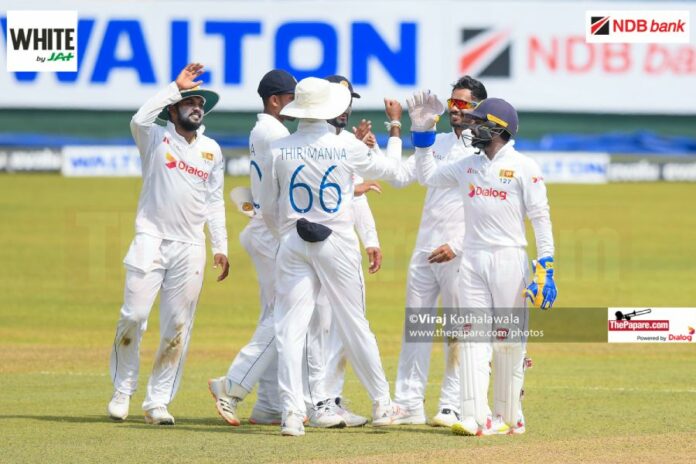 Only 65 overs of play were possible on day 2 of the 1st Test between Sri Lanka and Bangladesh, with persistent bad light forcing an end to the day’s play a little after tea. At stumps, Bangladesh were 474/4.

The visitors began the day in dominant form as overnight batters Najmul Hossain Shanto and Mominul Haque picked up from where they left off on day 1. This time however, they had to contend with a much better bowling performance from Sri Lanka on a pitch that looked like a batting paradise.

The hosts’ fast bowlers started off proceedings and were much tighter with their lines and lengths, trying to dry up the runs in the absence of wickets. The breakthrough finally came when Lahiru Kumara, who toiled hard throughout the innings, managed to get one to stop on Shanto, who was too early into his shot and gave the bowler a simple return catch on 163.

Sri Lanka nearly had Mushfiqur Rahim with the very next deliver as Kumara trapped him in front with a delivery that moved back in, but replays showed the ball taking Rahim’s edge before hitting his pads and the right-hander survived on review.

Sri Lanka missed the presence of Lasith Embuldeniya as their lead spinner Wanindu Hasaranga gave away a few freebies to the new batters, but Dhananjaya de Silva made another breakthrough, dismissing Mominul for 127, to stall the Bangladeshis further.

Not many chances came Sri Lanka’s way, except for a couple of run-out opportunities early in the day as they tried hard to extract whatever they could from the unhelpful surface.

The Bangladeshi tactics were somewhat baffling, as despite having 8 wickets at hand at lunch, they did not try to up the ante at any stage during the day. The visitors scored at a more than respectable 3.3 runs an over yesterday but could only manage a disappointing 172 runs in 65 overs today.

Play will commence at 9.45am tomorrow, with 98 overs scheduled for day 3.