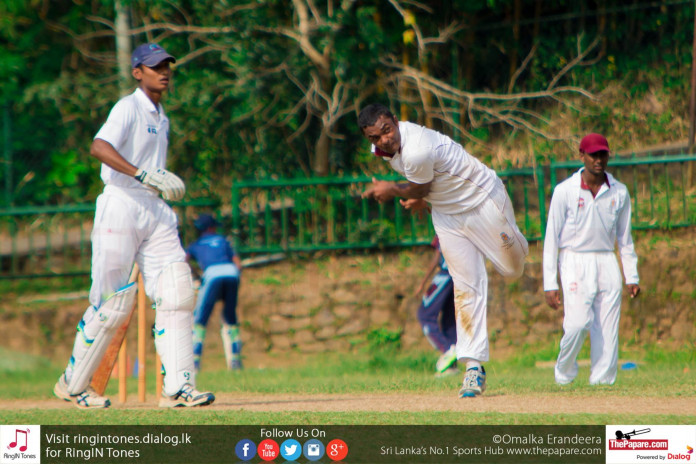 After winning the toss at Lakeview Grounds in Kandy, the visitors batted first and put up a massive 453 for the loss of 7 wickets. Dilhara Polgampola and Minoi Senanayake chipped in with well constructed tons to set up a bumper partnership of 180 runs for the second wicket. Wageesha Wanniarachchi (62) and Vinoj Srivinda (58) consolidated the middle order to reach the total. Left-arm spinner Ruchira Pupulewatte bagged three out of the seven fell.

In reply, the boys from Kandy played a challenging innings but were unfortunate to get bowled out for 312 runs. Back to back centurion Niwantha Herath attempted hard to make the hosts get closer but was dismissed on 130 turning the game towards the Nakanz’ way. Besides Niwantha, appreciable contributions were made by Bawantha Udangamuwa (39) and Shehan Witharana (36) to bring some hope to the Rajans.

Off spinner Janidu Jayawardhana who was the threat to the opposition claimed a five wicket haul while Himath Jayaweera and Minoy Senanayake secured three wickets and two wickets respectively.

Dharmapala skipper Himasha Liyanage’s stunning 195 was not enough as St. Sebastian’s College registered a first-innings win over the school from Pannipitiya in their drawn under 19 division one match which concluded on Tuesday at Moratuwa.

Sebastianite batsman Sandaruwan Fernando excelled with the bat for the hosts’ as he made 97 and 101 in both innings.

Title favourites, Richmond College, Galle managed to beat Dharmasoka College, Ambalangoda by 3 wickets in a thrilling under 19 division one match which ended on Tuesday at Mahinda College grounds in Galle.

Ravishka Wijesiri’s 7-wicket match bag helped the team from Galle to record this morale-boosting victory. The hosts’ are minus three of their star players due to national duty in Bangladesh.