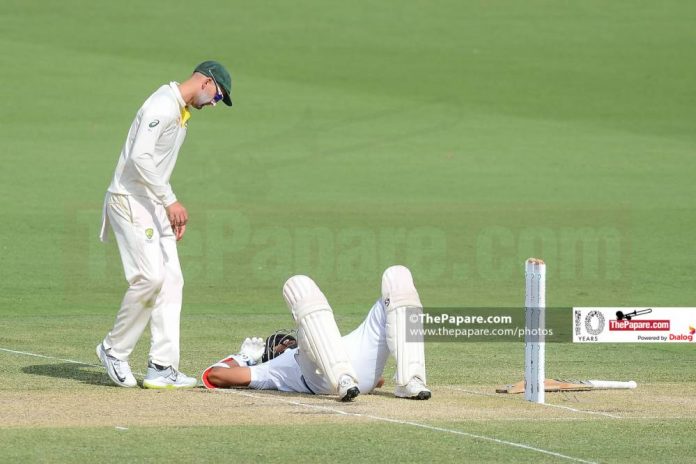 Dimuth Karunaratne was struck on the back of the neck by a delivery from Pat Cummins and had to retire hurt after an excellent 82-run opening partnership alongside Lahiru Thirimanne following which Australia got some crucial breakthroughs before close of play.

Karunaratne and Thirimanne looked steady in the middle on what seemed like a good pitch for batting. They were hardly troubled by the Australian bowling line-up, until Karunaratne took the blow. He tried to duck under a short one from Australia’s strike bowler, but the ball grazed his shoulder and crashed into the back of his neck. The left-hander immediately went to ground and the medical staff from both teams attended to him for a few minutes before stretchering him out. Karunaratne, though naturally shaken up, was conscious and speaking throughout the incident.

The next over saw Thirimanne attack Nathan Lyon, sweeping him and then driving him to the boundary, but the off spinner had the last laugh, getting him to nick to slip for 41.

The departure of Karunaratne turned out to be exactly what the doctor ordered for Australia as the pitch, which had looked so flat until then, began to do a little for the bowlers – especially Lyon. After he accounted for Thirimanne, Cummins, who has been Australia’s go-to man during the summer, bowled Kusal Mendis for 2, leaving Sri Lanka on 101/2, still trailing by 433.

Dinesh Chandimal was then caught in two minds whether to pull or not and gloved a delivery from Mitchell Starc to the keeper. Starc, who hasn’t been at the top of his game during this summer, bowling with some pace today and the wicket of Sri Lanka’s captain was just reward for the big pacie’s hard work.

Kusal Perera and Dhananjaya survived a few close calls to make it to the end of the day unscathed.

Earlier in the day, Kurtis Patterson and Tim Paine built on Australia’s overnight score of 384/4, with a 130-run partnership for the 5th wicket, as another disappointing day in the field came to an end with Australia’s declaration on 534.

Kasun Rajitha struck early on in the day, picking up Joe Burns for a well-made 180, but Sri Lanka were unable to make any inroads from that point onwards. The bowlers continued to give it their all, but were unable to consistently keep to a good line and length. As was the case yesterday, the loose balls, which inevitably came every over, were dispatched with ease by both Patterson and Paine.

Patterson, who was dropped off the very first ball he faced yesterday – at short leg by Lahiru Thirimanne – drove well and reached his maiden century midway through the 2nd session. Australia’s run-rate continued at more than a healthy rate of 4 an over, despite Sri Lanka pulling things back today.

Day 3 will begin with Sri Lanka still 411 behind.

Hathurusingha no-more a selector! What next?