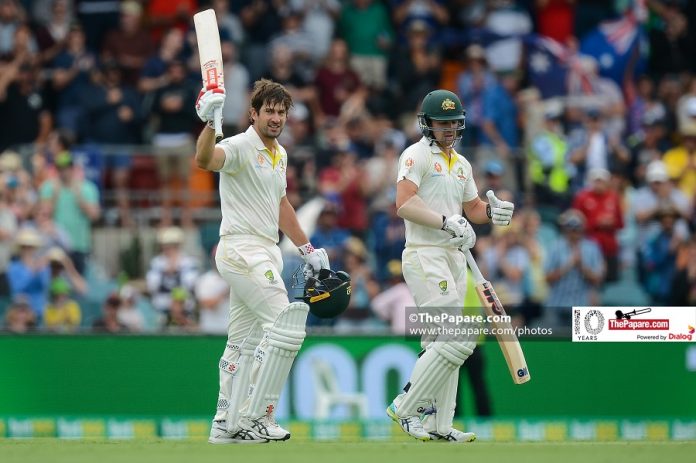 The 2nd and last Test of the 2-match Test series between Australia and Sri Lanka for the Warne-Murali Trophy began today at the Manuka Oval in Canberra. The hosts took the upper hand over Sri Lanka on the opening day, scoring 384 runs in 87 overs, re-building from a poor start.

In team news for Sri Lanka, apart from the 3 forced changes, Roshen Silva was left out for Kusal Perera while the hosts named an unchanged XI to take the field in Manuka Oval’s Test debut. The stadium became the 11th Australian venue to host a Test match.

Returning left-arm seamer Vishwa Fernando started off proceedings for Sri Lanka as he dismissed Marcus Harris in the 4th over of the day. It also gave Karunaratne the opportunity to claim his first international catch as Harris slashed at a very wide delivery. Usman Khawaja’s lean patch continued as he edged an out-swinger from Fernando giving an easy catch to Kusal Mendis at second slip.

Karunaratne, replacing Suranga Lakmal who was ruled out due to a back injury, was introduced to the attack in the 9th over and straight away got off the mark. He set up in-form Marnus Labuschagne beautifully and got the edge off a perfect full delivery.

The Sri Lankan pace trio including Kasun Rajitha, took maximum advantage of the swinging conditions in Canberra, which has been the friendliest venue for swing bowling throughout this Australian summer. As the swing started to disappear gradually, Joe Burns and Travis Head began repairing the Australian innings.

The duo remained unbeaten at lunch, with their partnership on 75. Dhananjaya de Silva in fact put down Burns on 34, a few overs before the lunch break off the bowling of Dilruwan Perera.

Carrying on from where they left before lunch, Burns and Head resumed the battering of the inexperienced Sri Lankan bowlers, batting through the middle session unbeaten. The young pace triplet had no clue on how to tame the Aussie pair without assistance from the pitch as the wicket turned out to be a belter of a track to bat on.

The sole spinner for Sri Lanka, experienced Dilruwan Perera was given more overs expecting for a breakthrough, but disappointed everyone, giving away more than 4 runs per over. De Silva was tried as the 5th bowler with no success, but he was at least economical, with the best economy rate of the day for Sri Lanka, 2.85.

Sri Lanka were satisfied with their catching in the previous test, despite putting down just one or two tough chances. But, today was a shocker of a day as they dropped 4 catches, which cannot be considered as half chances in this level of Cricket.

Dilruwan dropped Head on 87 off Rajitha’s bowling in the penultimate over before tea, repeating what De Silva did before the lunch break. Then again in the last session, De Silva dropped Head on 155 off his own bowling.

The fourth dropped catch was the most frustrating one for Sri Lanka as it was the first ball of Kurtis Patterson’s innings, as he came in to bat after a 308-run partnership was broken. Patterson who faced a delivery from De Silva just after Head was dismissed LBW by Fernando in the previous over, offered a sitter to Lahiru Thirimanne at short-leg. Unfortunately for Sri Lanka, Thirimanne dropped it – summing up a bad day for Sri Lanka.

Patterson managed to hang around with Burns as they finished the day just 2 runs short of a 50-run partnership. Patterson was unbeaten on 25 in 48 deliveries. Burns’ innings was paused on 172 with 26 fours at stumps, as the best innings for Australia this summer. Head scored 161 runs to record the first 150 for Australia this season, overtaking Burns who scored the first century.

In bowling for Sri Lanka only Fernando and Karunaratne were successful with 4 wickets between them. Although Karunaratne started impressively, the lack of experience in him was evident as he ended the day with an economy rate of above 6. Fernando too was expensive with a rate of almost 5 runs per over. Rajitha, despite going wicket-less managed to bowl 5 maiden overs which most of the others struggled to do during the Burns-Head onslaught. Sri Lanka also over-stepped 5 times with Karunaratne and Rajitha being the culprits.

The hosts will resume their 1st innings on 384/4 tomorrow for the 2nd day’s play.