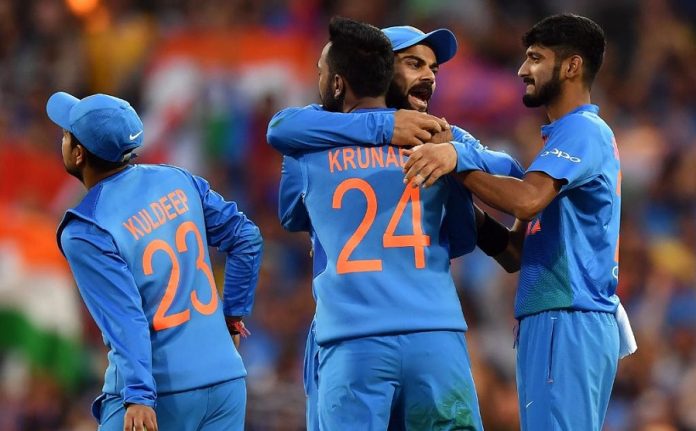 An unbeaten 61 from Virat Kohli and four wickets from Krunal Pandya helped India claim a six-wicket win in Sydney in the third and final T20 International to level the series at one match a piece.

Australia started with a decent stand from their openers after Aaron Finch had won the toss and elected to bat first in front of a record crowd at the SCG that was dominated by Indian fans. A 68-run stand in 8.3 overs from Finch and D’Arcy Short gave Australia a solid platform from which to build as they made the most of the bowling from the Indian seamers. It was when the spin of Krunal and Kuldeep Yadav came into the attack that things changed.

Kuldeep was miserly and dangerous in his four overs as the Australians just looked to see him out rather than take any sort of risks against him. He bowled 13 dot balls in his spell of 1/19 that meant that the Australians had to take risks elsewhere. It was Krunal that made the most of the fact that his spin partner was difficult to get away, with the Australians forced to attack him and he was in the wickets as a result. Krunal finished with 4/36 from his four overs, the best figures by a spinner in a T20I in Australia.

Short top scored with 33 (29) as no Australian batsman was able to push on once they got themselves set. It was the 25 (15) from Marcus Stoinis that allowed them to get past 150 and set a total of 164/6. It was enough to make the game competitive but the Indian spinners had kept them below par on a decent pitch.

The Indian side got off to a flying start thanks to Shikhar Dhawan who made 41 (22) before he was the first wicket to fall when he was trapped lbw by Mitchell Starc. A 67-run stand from 5.3 overs had broken the back of the chase and it meant that India could recover from losing Rohit Sharma on the same score eight balls later. India also lost two quick wickets later in the innings when KL Rahul and Rishabh Pant went in the space of three balls with the score on 108.

While wickets fell Virat Kohli was calmness personified as he glided to a match-winning half-century, and he was happy to be the anchor that held things together for his side. After the double blow of losing Rahul and Pant, Kohli was well supported by Dinesh Karthik who made 22 (18) as India got home with two balls to spare.

The next fixture for these two teams will be the first of four Tests which gets underway in Adelaide on 6 December.