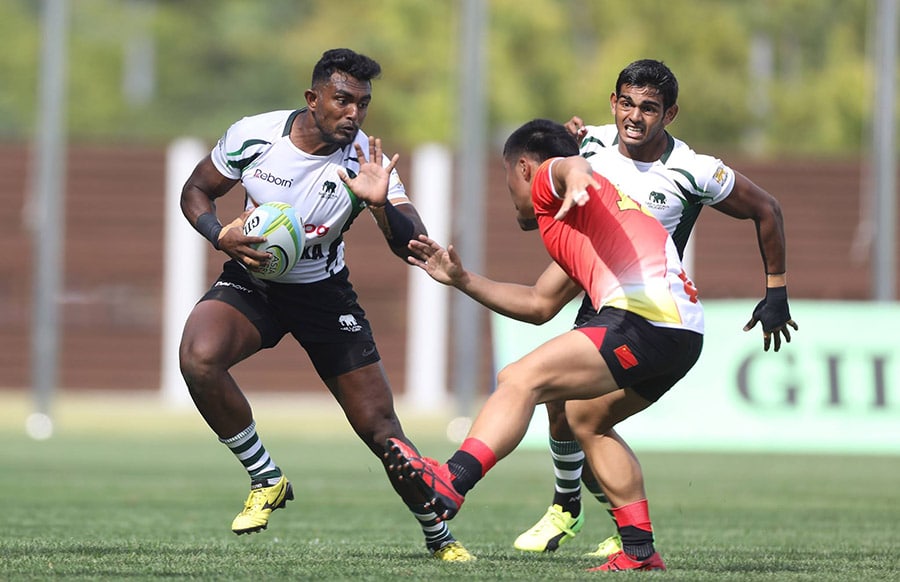 South Korea didn’t favour the Sri Lankans second time around as last year’s finalists failing to progress beyond the cup quarterfinals and ended up eventually winning the plate title diminishing their chances of making it to the Rugby Sevens World Cup.

It was another disappointing finish for the Tuskers in the second leg of the Asia Sevens Series in South Korea. Sri Lanka met their Achilles heel Hong Kong in the quarterfinals and there were no surprises with Hong Kong recording a comfortable 14-31 win.

The loss to Hong Kong in the quarterfinals in South Korea was the second successive occasion that the team failed to make it to a semifinal.

Read about the Women’s team’s progress

However, Sudarshana Muthuthanthtri’s team managed to defeat Malaysia in the 5th & 6th playoff to claim the Plate title but that makes no difference in the series points table.

Sri Lanka will continue to occupy the 5th position in the series with no upward movement amassing 5 points in each leg.

Hosts South Korea has been the turnaround team this leg defeating Hong Kong in the semifinal and then concluding as cup champions defeating the Asian powerhouse Japan in the finals. The crunch finals saw the Koreans winning the title 17-12.

The Asia Sevens Series table after two legs are as follows:

The South Korean victory last weekend changed the scope of the series with Japan, South Korea and Hong Kong all three with prospects to win the series.

While Japan require a final finish in Colombo to seal the series and to eventually qualify for the Rugby Sevens World Cup next year, the second qualifying position will be a tight contest between South Korea and Hong Kong.

Sri Lanka’s chances of making it to the Rugby Sevens World Cup is a lost cause with only 10 points in total in two legs. The best Sri Lanka could do is to improve on their ranking to a possible fourth place finish.

With three weeks to go for the final leg, the Tuskers will surely need to pull their socks up if they yearn to better their performance when they play in front of their home crowd on the 14th and 15th of October.