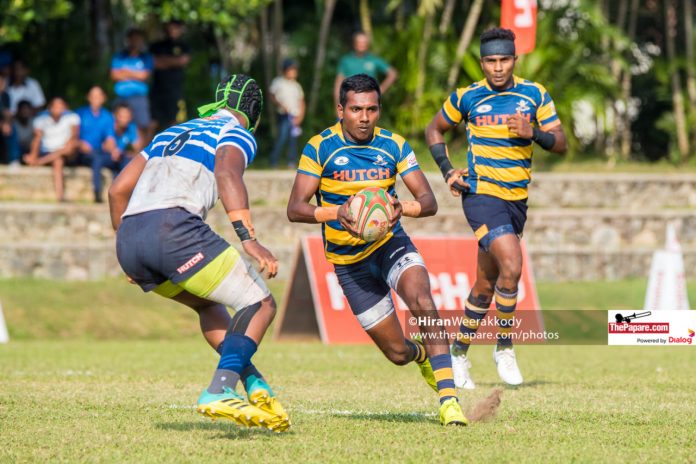 Army Sports Club held Navy Sports Club score-less in the second half as the hosts made an extraordinary comeback to seal a dramatic 45-26 win in the Dialog Rugby League game played at Racecourse.

The Army made two changes coming into the game as Shelton Kumara and Chamath Fernando replaced Rajan Jayarathna and Manjula Weerasinghe.

Meanwhile, Navy Sports Club made four changes with Raveen De Silva and Stephan Gregory pairing up in the locking position as Thanuja Malimbada and Samith Dananjaya made way into the run-on XV.

Both teams traded tries as the game opened out early on a sunny evening at Racecourse. Radeesha Senevirathne was the first as Navy got off to the perfect start. The number. 08 broke off a maul and crashed over the white-wash. Isuru Kongahawatta added the extras rounding off a perfect-seven. (Army 00-07 Navy)

Winger Madusanka Chandrasekara replied for the Soldiers straight away as the Army backline came to life. Isuru Medagedara made no mistake with the kick-off the tee as the game was tied 10-minutes into the game. (Army 07-07 Navy)

Points were plentiful as the game opened up further giving the viewers plenty to cheer about.

Sudaraka Dikkubura’s chip kick was grabbed out of the air by Raveen De Silva as the former Josephian made a clear dash to the try line as Navy regained the lead as Kongahawatta notched over the conversion. (Army 07-14 Navy)

Dikkuburu made immense for his error earlier in the game as the winger was found in support of Tomasi Caqusau. The Big Fijian broke through in typical Fiji style, setting up the National Cap winger to crash over in the corner.

Isuru Medagedara failed with the conversion from the touch-line as Navy’s lead was cut down to 2-points. (Army 12-14 Navy)

The action continued with both teams going hammer and tongs at each other.

The Army defence folded under pressure yielding two further tries before the break. Charith Silva was the first to crash over from close range.

Moments later Stephan Gregory bumped his way through the Army defence, crashing over for the bonus point try after the hooter to extend the Sailors lead further.

The Soldiers came out following an earful from the backroom staff, and the Army turned out in flying fashion.

Army scored 5-tires past Navy in the second half, as their defence held firm, and their attacks held their opponents scoreless in the second forty.

Ashan Bandara opened the scoring in the second half. Tomasi Caqusau followed suit with a try of his own as the giant centre bullied his way through to the chalk.

The two second-half tries made it a two-point game as the rest of the game tilted in favour of the hosts.

Player of the match Madusanka Chandrasekara was handed his second of the game in generous fashion from Caqusau. The Centre made a second telling brake in a matter of minutes and gifted Chanrasekara drove the ball over the line with a dive over.

With the game in the balance, Navy strung attack after attack, and the Army defence held firm.

With the game all but over, Thalwatta doubled his try tally after the hooter rounded off Army’s splendid second-half showing with a win.