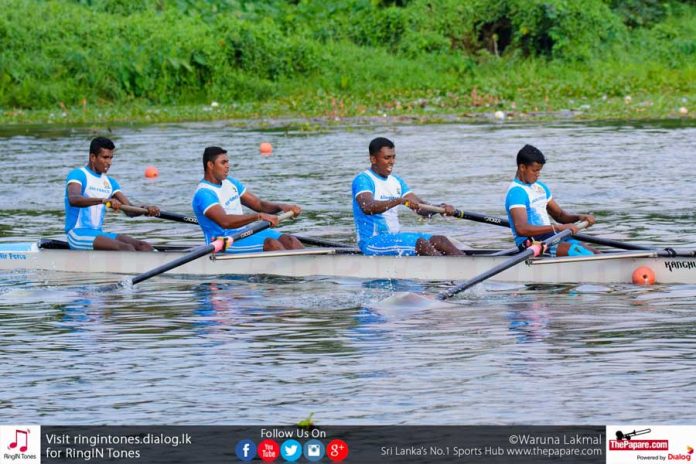 It will be the first time in 08 years that Sri Lanka sends a Rowing crew to take part at the Asian Games. Sri Lanka were last represented in rowing at this multi-sport extravaganza at the 2010 Guangzhou Asian Games in ‘Single sculls’. Hopes are high of a medal this time around, based on last September’s Asian Championships performance in Pattaya, Thailand.

Two airmen and two soldiers will come together hoping to spark some Armed Forces magic in favor of Sri Lanka Rowing, at the 2018 Asian Games in Jakarta and Palembang.

The four were selected based on their recent performances and after a lengthy selection process that started in April this year. The training lasted two months followed by two weeks of trials. At one trial, the quadruple scull of Chaturanga, Rupasinghe, Senerathne and Udawaththa had recorded a best time which was one second outside the gold medal time at the 2014 Incheon Asian Games, raising hopes within local circles of a medal at the Jakabaring Sport City Lake in Palembang. But, the coaching staff and the federation is fully aware that standards have improved across Asia since the last Asian Games, and are giving their maximum efforts to improve our local rowers’ timing even more.

In the past, rowers had to use the Beira Lake facilities which was well short of international standards –1600 meters instead of 2000 meters. Fortunately, with the commissioning of the Diyawanna Rowing Centre and the rowing canal at Waters Edge being expanded to international specifications, the sport has been uplifted – providing our athletes with better facilities and exposure.

The Rowing competitions will take place from the 19th to the 24th of this month.

Stay logged on to ThePapare.com for updates and results.