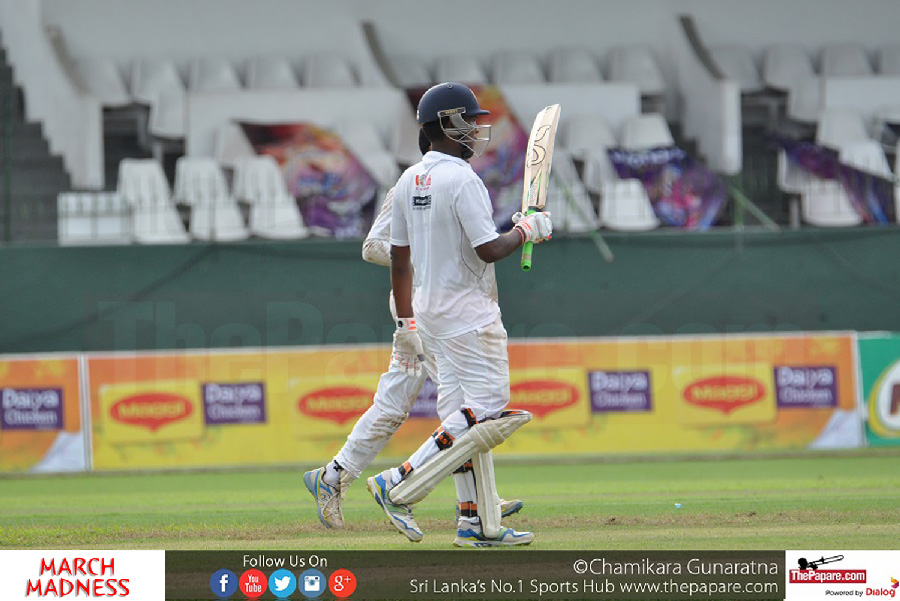 Captain Kavishka Anjula and Sammu Ashan dominated with ball and bat respectively to hand Ananda College bragging rights at the end of day one in the 88th battle of the Maroons, played at Sinhalese Sports Club grounds.

Winning the toss and bowling first, Ananda College made easy work of the Nalanda batting, dismissing them for just 144 in 51.5 overs.

Kavishka Anjula was the pick of the bowlers for Ananda, bagging 3 for 37 along with a sublime catch to add to it. He was well supported by fellow paceman Chamika Gunasekara as he, along with off-spinner Supun Waragoda, bagged 4 wickets between them.

Suhanga Wijewardana along with Madushan Hasaranga scored 37 and 31 respectively for Nalanda in a rather dismal batting performance where only 5 batsmen were able to get to double figures.

Opening batsman Avishka Perera was the only other batsman to pass the twenty run mark as the right-hander managed 26 for Nalanda. Perera was bowled by a peach of a delivery from captain Anjula, which uprooted his off stump.

Batting in their first innings chasing a target of 145 for a first innings win, the Anandians managed 160 for the loss of 5 wickets as Sammu Ashan made an unbeaten 60.

He was well supported by Dushan Hettige and Captain Kavishka Anjula as the duo made 37 and 26 respectively as they took Ananda past the Nalandians’ 144 on day one.

Asel Kulathunga was the pick of the bowlers for Nalanda picking up 3 for 45 as Malinga Amarasinghe managed 2 wickets for 32 runs as 95 overs were bowled on day one.