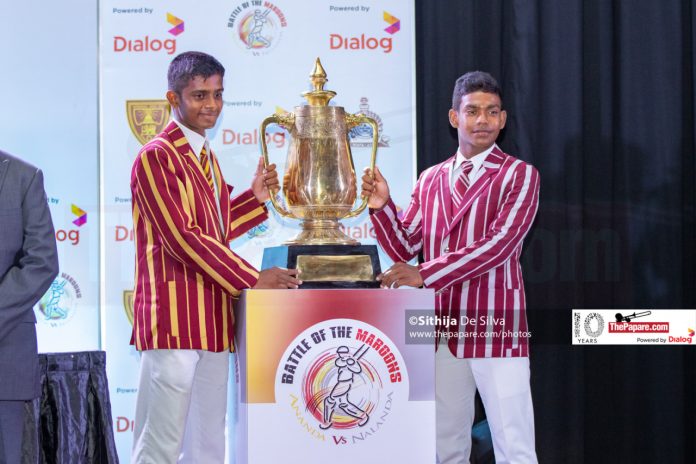 The 91st edition of the ‘Battle of the Maroons’ organised by the joint committee including leading personalities of past students from the two schools, is scheduled to be played at the SSC grounds on the 7th and 8th of March 2020, while the One Day encounter between the two schools, played for the Kularatne Trophy will go head to head at the same venue on 15th March 2020.

The well-coordinated efforts of the joint organising committee over the past decade has ensured that the ‘Battle of the Maroons’ is worked out with much fanfare amidst a carnival atmosphere and many attractions for entertainment for all family members of past students, while the game has continued to be played with the rich traditions and at the highest standards that this encounter is well known for.

In the past 90 encounters, Ananda College has won 12 times to lead the tally against the 6 wins of Nalanda College.

The Nalanda battalion will march under the leadership of Avishka Perera who has scored over 1000 runs this season. The right-handed wicket-keeper batsman scored a stylish ton in the last big match.

The Ananda College counterpart, Kanishka Ranthilakage too has had a fine season this year and will be looking forward to stamping his identity at the big game.

Ananda College and Nalanda College, the two premier Buddhist schools in Sri Lanka have so far produced over 55 national cricketers to have represented Sri Lanka in international cricket – with 6 of them – Bandula Warnapura, Arjuna Ranathunga, Roshan Mahanama, Marvan Atapattu, Mahela Jayawardena, and Dinesh Chandimal – having had the honour of leading the Sri Lankan team.

Epasinghe and Palitha Perera who were instrumental in popularising the game to this extent through the length and breadth of the country.

The Ananda-Nalanda two-day encounter, as well as the one-day match, will be telecasted LIVE on Dialog Television Channel Number 01, live-streamed on ThePapare.com and on the Mobile TV streaming application MyTV.