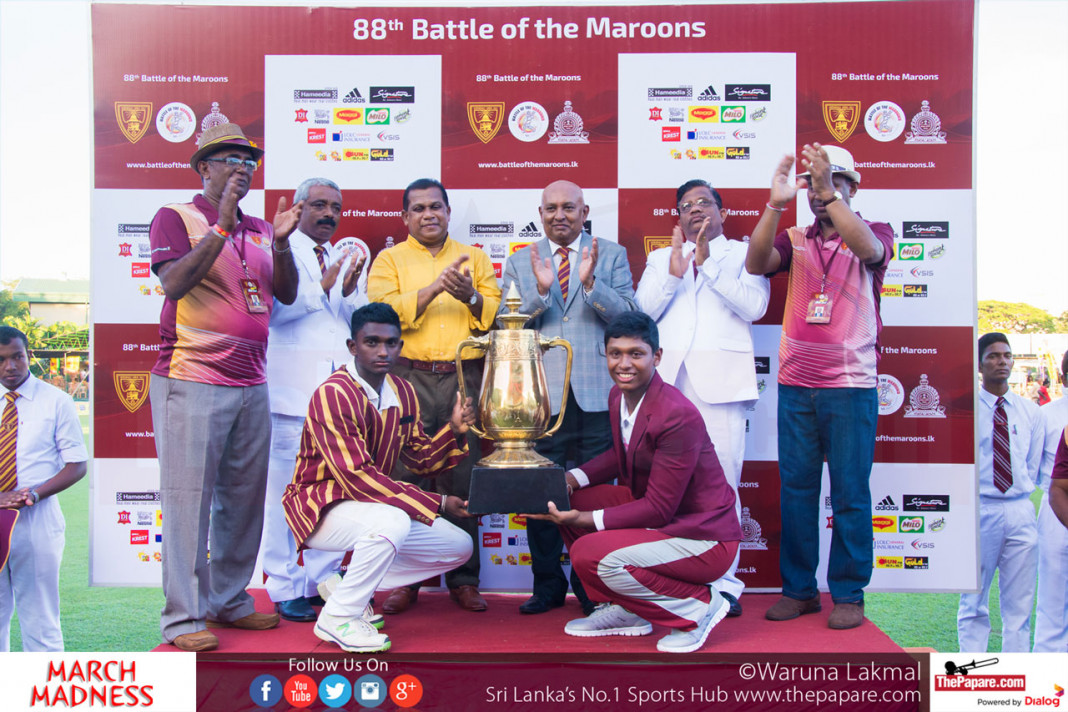 Lakshitha Rasanjana struck a magnificent 113 not out in the second innings to help Nalanda College to a fighting draw in the 88th Battle of the Maroons.

Ananda began the final day with a slender lead of 16 runs, seemingly in pole position for an outright win in the 88th Battle of the Maroons played at SSC.

Nalanda opening bowler Kalana Perera had other ideas as he, first dismissed experienced campaigner Sammu Ashan for 67 as the right-hander held out at mid-on to Asel Kulathunga.

Kamesh Nirmal followed suit for 28 in a similar dismissal, holding out to Kulathunga as both overnight batsmen found themselves back in the dugout early on in the second morning.

Supun Waragoda was paceman Perera’s third wicket, holding out at gully for 7 runs as Ananda surprised us all, declaring their first innings at 190 for the loss of 8 wickets, leading Nalanda by 46 runs with plenty of time left to dismiss the Nalandians and go for the win.

Nalanda headed out to the middle with a point to prove, showing that the first innings failure was a one-off situation.

Captain Dasun Seneviratne piled on a solid 39 off 85 balls with 3 fours and a single six even though he witnessed the demise of his fellow opener Avishka Perera for just 7 runs.

Malinga Amarasinghe and Suhanga Wijewardane made valuable contributions with the bat. Amarasinghe chipped in with 21 before falling to Supun Waragoda while Wijewardane managed 44, unlucky to miss out on a deserved half century.

Man of the match and best batsman, Lakshitha Rasanjana made a resounding 113 not out which included 11 fours and a solitary six to take his school towards the safety of a draw.

He was well supported by wicketkeeper Kasun Sandaruwan who scored an unbeaten 50 as the duo put on a mammoth 111 run stand for the 5th wicket as the game ended in an interesting draw to bring the curtain down on the 88th Battle of the Maroons.