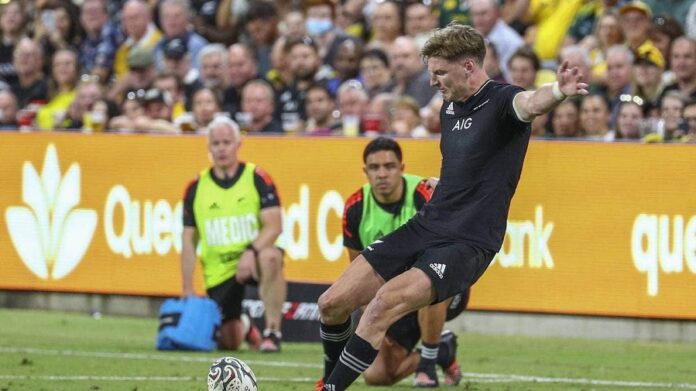 If Ardie Savea and his All Blacks can’t beat the Springboks again next weekend, it could mean a jagged pill resurfaces in World Rugby’s mailbox.

While the 19-17 win over the world champion Springboks in Townsville on Saturday night ensures the All Blacks have secured the Rugby Championship title with a round to spare, they’ve got some urgent tasks to compete in the days ahead.

Forget, for a moment, that the All Blacks want to stretch a nine-game winning streak for 2021 when they resume hostilities against the South Africans on the Gold Coast.

The major topic of discussion this week will be whether they can reduce their errors, capture the high balls from Springboks kicking machine Faf de Klerk and correct the set-piece problems before hitting the grass at Cbus Super Stadium.

Should the All Blacks do that, and get their vaunted attacking game to function properly, the law makers at World Rugby would surely be grateful.

Because if Jordie Barrett hadn’t succeeded with an angled 45m penalty kick in the 78th minute, the Springboks would have a terrific reason to tell critics what to do with their whining about a stodgy game plan that, surely, only the most parochial South African fans could love.

World Rugby promotes its product via its often-maligned law book. And when the Springboks play like they did at Queensland Country Bank Stadium, it reignites debate as to whether the governing body is doing enough to ensure the sport is worth watching.

Many would say the game deserves better than this.

Not that the All Blacks assisted in the argument against the Boks’ tactics; in addition to struggling to defuse halfback de Klerk’s bombs, they spiked promising attacks by rushing passes against the rush defence, lost four lineouts and conceded several scrum penalties.

Following an early try to wing Will Jordan, the All Blacks were unable to score another five-pointer in the remaining 77 minutes.

Were it not for Barrett’s immaculate goal kicking, he nailed four penalties and a conversion, the memories of the All Blacks’ 100th game against the South Africans would have been forever tarnished.

All Blacks coach Ian Foster, afterwards, got to the point.

Yes, he agreed it was scrappy, but his side’s tenacity and determination delivered the trump card when defeat loomed.

“Clearly we’re not the finished product yet, we know that, but I loved the way we stayed in the fight,’’ Foster said. “We problem-solved, and we muscled up.”

But had it not been for the vital penalty turnover by replacement midfielder Quinn Tupaea, which was followed by Barrett’s kick, the All Blacks could have easily lost.

In their eagerness to suffocate their opponents’ attack the Springboks conceded 16 penalties, six more than the All Blacks, and wing Sbu Nkosi was yellow carded.

On Sunday All Blacks forwards coach John Plumtree admitted the standard of work at the breakdown “wasn’t anywhere near the standard it needs to be against the Springboks’’.

”We couldn’t build enough pressure because we kept turning the ball over,’’ Plumtree said.

Plumtree also said the All Blacks were guilty of being too flat on attack which allowed the Springboks umbrella defence to race up on the runners out wide.

The Springboks also kicked 38 times from hand, mostly via de Klerk, and passed the ball just 66 times compared to the All Blacks’ 142.

The most damning statistic for the All Blacks was in turnover count; 24 to the Boks’ nine.

Nkosi scored the Springboks’ only try, a result of left wing George Bridge dropping a de Klerk missile, but their line breaks were rare because the ball rarely went past playmaker Handre Pollard.

The All Blacks now have the option of selecting Richie Mo’unga, who leaves quarantine on Tuesday morning, but Foster may stick with the battle-hardened Beauden Barrett at No 10.

Loose forward Dalton Papalii and midfielder Anton Lienert-Brown could also be available if they have recovered from high hamstring strains.

No 8 Luke Jacobson, who withdrew at late notice from the test because of a stomach complaint, could also return if fit.

Plumtree said the All Blacks, despite the high error-rate, remained committed to playing at speed even though the Springboks did their best to slow the game down.

”I am pretty sure it’s a tactic. No-one wants to play a high-speed tempo against us right now. But it’s up to the officials to deal with that.’’