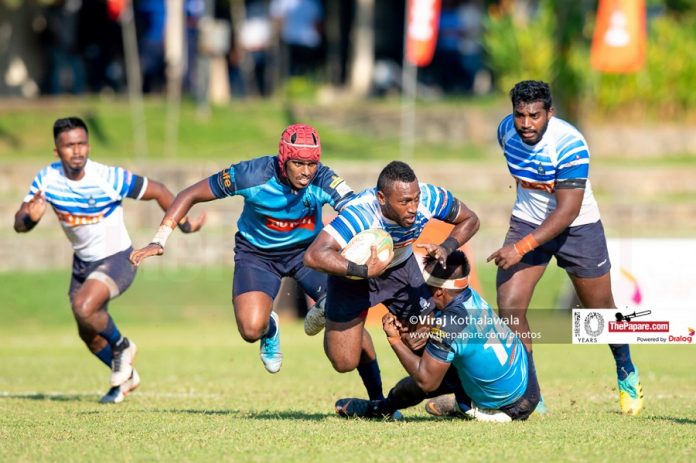 The visitors Navy SC kicked off proceedings, with a long hanging kick by Isuru Kongahawaththa which was retained by his forwards, giving Navy undisputed advantage during the opening minutes of the game.

The time until the first score on board, felt like an eternity until Navy’s Seru Cavulati powered his way forward scoring the opening try of the game in the left corner, putting the Sailors on top. However, Kongahawaththa missed his second opportunity to add points on the board, as he misread the strong breeze blowing across the ground. (AF 00-05 NSC)

Meanwhile, the home team got their first opportunity to get onto to the scorebooks, after an infringement caused by Navy. Seneviratne made no mistake from the tee, adding three crucial points on board. (AF 03-05 NSC)

Navy Sports Club, replied strongly as their power packed Flanker Adeesha, crossed over the line after a few controlled phases by the forwards. This time Kongahawaththa was successful with his kick, putting his team in a comfortable position. (AF 03-12 NSC)

As the game closed in on half time, Airforce was gifted a penalty, where they wisely decided to go for touch, gaining substantial ground and eventually scoring off a rolling maul, in which Lahiru Udayanga did the honours. Nevertheless, Seneviratne failed to covert the try this time around. (AF 08-12 NSC)

Close to 10 minutes into the second half, Airforce SC managed to get into the scorebook, where Senevirathne, reacted swiftly to take a quick tap, ultimately displaying a one man show, slicing through a number of defenders, scoring in the left corner. This time, he managed to chip in, what looked like a difficult kick, putting his team in the lead. (AF 15-12 NSC)

A few phases later, ASC’s sloppy defence proved to be costly as Navy’s Mahesh Madushanka marched his way over the line, once again giving Navy the lead. Kongahawaththa, unfortunately was unsuccessful with his conversion attempt. (AF 15-17 NSC)

The Airmen’s persistence with the ball earned them a penalty right under the post, through which Senevirathne managed to lift his team back to the top. (AF 18-17 NSC)

Airforce SC continued to dominate for some time, as they stole a lineout, through which they managed to build phases eventually earning a well-deserved penalty. Senevirathne successfully extended the lead, by means of an excellent kick in between the posts. (AF 21-17 NSC)

Towards the latter part of the game, Navy Sports Club showed some class, as they continued to be in control of the game, eventually opening up space for Navy’s powerful Lock Forward Gihan Perera, who bulldozed his way over the try line to score the winning Try. Kongahawaththa, added the extra two points with a perfect kick through the post. (AF 21-24 NSC)

The home team fought until the last minute with intentions of re-claiming the lead! However, the Visitor’s defence held firm proving to be immovable as Navy Sports Club sealed a much-needed victory.

Peterites pledge to go Green as they felicitate their sponsors!