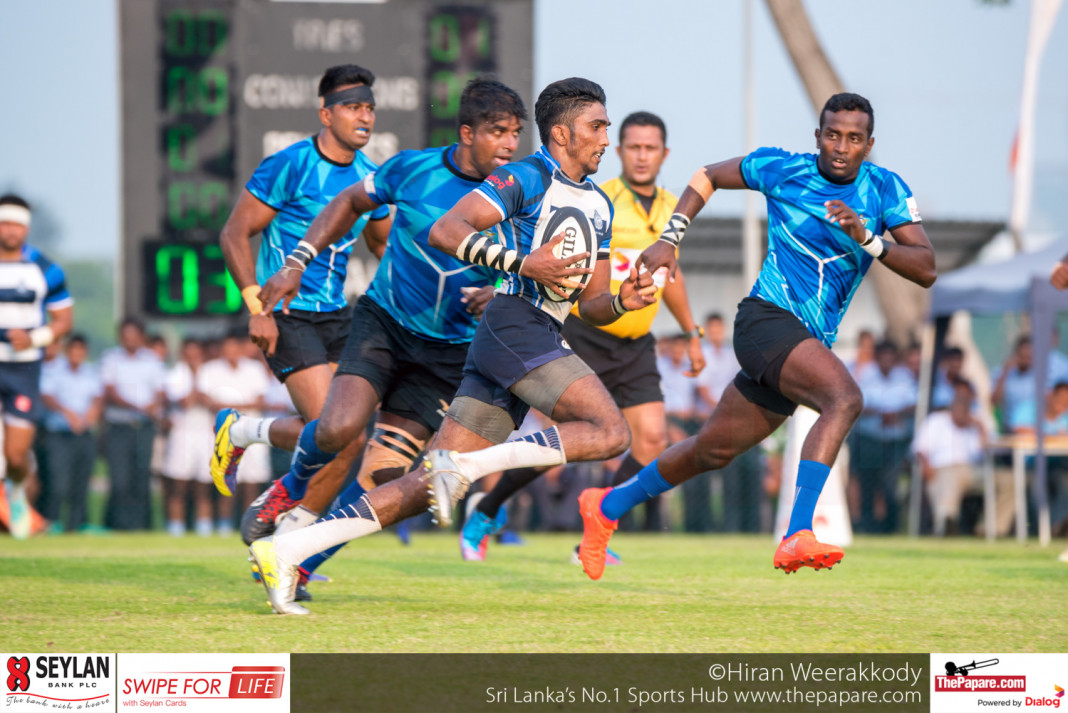 A successful second half rally by Navy Sports Club brought them back to winning ways as the Sailors registered their sixth win in the Dialog Rugby League, defeating Air Force 22-08 at Ratmalana this evening (16th).

Moving on to the penultimate week in the first round of the league, Navy were all out to make a statement in their final outing before the league takes a break for Christmas but were given a hard time by Air Force in the 1st half.

Drawing first blood in the match was Navy, when Kanchana Perera touched down as the strong Navy forwards pushed through to the try line. Thilina Weerasinghe was unlucky on his first attempt at adding the extras as the ball went off the uprights. (05-00)

Air Force later cut the deficit to two points as Charith Seneviratne kicked a 23m penalty to add the first points for his team. From there on the Airmen were gifted with many opportunities by their visitors but sloppy ball handling and discipline cost them valuable points. Air Force almost made it through on one occasion for a try but unfortunately Charith Seneviratne knocked the ball on at the try line.

The Sailors came on with renewed energy in the second half and utilized their forward pack weight for their benefit. Navy opted to go for a 10m lineout on a kickable penalty and used the weight advantage in their forwards line to score the second try. It was Dulanjana Wijesinghe who touched down and Thilina Weerasinghe added the extras. (12-03)

Air Force’s Charith Seneviratne was missed out with his 2nd penalty kick as it did not find the goal post, depriving his team of three important points. His counterpart, Thilina Weerasinghe, however, dissected the uprights to make it (15-03).

Navy had a re-run of their earlier try scoring act towards the 72nd minute and this time it was Sathya Ranathunga who scored, shoving off three players. Weerasinghe added the extras. (22-03)

With the clock running out, there seemed to be no luck coming Air Force’s way to stage a comeback and they had to settle for a consolation try by Parakrama Rathnayake as the referee blew for full time. (22-08)

Navy will be happy to take the points from the encounter but will be disappointed to not have the bonus point that is awarded for scoring four or more tries. They only have themselves to blame as they did not come out with their ‘A’ game.

Air Force, on the other hand, had the right moral discipline to go for the win but the absence of a proper structure and coordination sold the opportunity away. The absence of regular scrum-half Ashok Vijeykumar was clearly felt as the two half back combinations did not seem to be having the right chemistry to control the game.