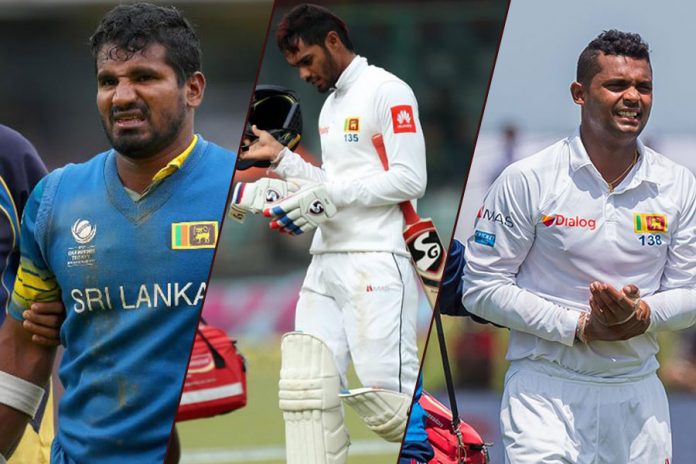 Sri Lanka’s Delhi hero Dhananjaya de Silva has been ruled out of the first ODI against India here in Dharamsala while fast bowler Suranga Lakmal and Batting Coach Tilan Samaraweera skipped training on Saturday due to constant vomiting.

A humiliating whitewash, the worst series defeat and only the second time Sri Lanka was crushed…

Dhananjaya, who posted his third Test hundred and helped Sri Lanka to salvage a draw in the third Test, hurt a nerve in his glute muscle during his match-saving effort and was under medication. He was at the ground yesterday, but did not train and has been ruled out as he struggled to move freely.

Lakmal, who repeatedly vomited during the Delhi Test trained on Friday, but after vomiting several times later in the day skipped training on Saturday. Lakmal, however, is expected to feature in the first ODI.

The poisonous smoke in Delhi made several players sick and fast bowlers Lakmal, Lahiru Gamage and Mohammad Shami vomited on the field. Several players had breathing trouble and had to be administered a supply of oxygen to ease breathing problems.

All Sri Lankan players wore protective masks on the second day of the Test match and play was held up for 22 minutes as players had to leave the field for medical treatment.

Danushka Gunathilaka is set to open the innings with former captain Upul Tharanga, who has been in prolific form. Sri Lanka will make a call on the number three slot witheither Sadeera Samarawickrama and Lahiru Thirimanne eyeing for the position. Former skipper Angelo Mathews will be at four followed by wicket-keeper batsman Niroshan Dickwella.

Also read : Asela and KJP will be crucial believes Thisara

All-rounder Asela Gunaratne, who is returning after a four-month layoff having fractured his left thumb will bat at six. Suranga Lakmal will share the new ball with Nuwan Pradeep, who was rested for the Test series. Conditions here will help seam bowlers and the tourists have the options of captain Thisara Perera and veteran Angelo Mathews in that department.

Sri Lanka have lost 12 games in a row and have been whitewashed 5-0 in three series this year against South Africa, India and Pakistan.