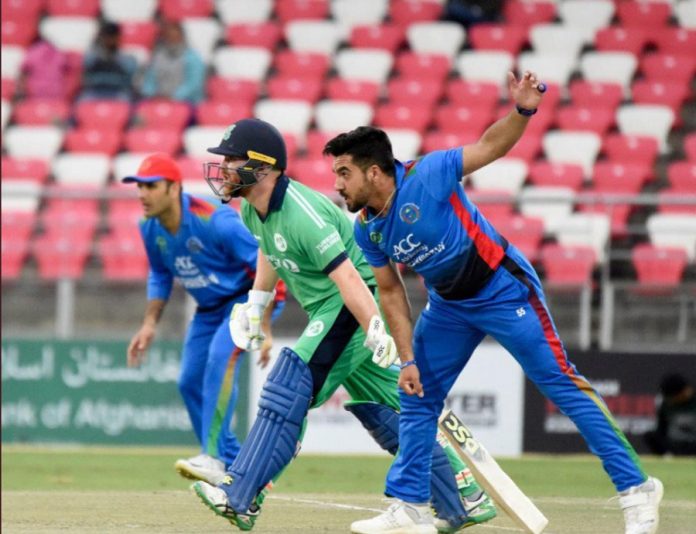 A four-wicket haul from Aftab Alam and an excellent all-round show from Rashid Khan helped Afghanistan crush Ireland by 109 runs in the fourth ODI at Dehradun.

Alam collected a personal ODI-best of 4/25, dismantling the Irish chase to help Afghanistan take a 2-1 lead in the series. The right-arm seamer’s burst of wickets followed on from Afghanistan’s total of 223, with half-centuries from Asghar Afghan, Mohammad Nabi and Rashid Khan saving face after the batting side had been reduced to 81/6.

Rashid’s batting display was followed by a typically reliable job with the ball, as he collected figures of 2/22 from his six overs to provide a comfortable win.

Aftab Alam’s 4/25 and two wickets each for Rashid Khan and Mujeeb Ur Rahman cause Ireland to crumble to 114 all out – Afghanistan win by 109 runs in the 4th ODI!#AFGvIRE scorecard ➡️ https://t.co/kR79PwjajJ pic.twitter.com/rQkdRRVGsT

Much like the previous ODI, Ireland’s bowlers gained the upper-hand early on. Andy McBrine continued his excellent form with the new ball, bowling Hazratullah Zazai (14) after the batsman had taken 10 runs from the previous two deliveries.

Tim Murtagh removed Noor Ali Zadran (9) the very next over, while Boyd Rankin accounted for Rahmat Shah (15). Ikram Ali Khil and Gulbadin Naib both fell with just a run to their names as Afghanistan were left reeling at 67/5 after 13.2 overs. The third ODI saw Najibullah Zadran and Asghar Afghan stage a rescue job for Afghanistan with a 117-run sixth-wicket partnership, and hopes would have been high in the Afghan changing room for a repeat of those heroics.

James Cameron-Dow, however, put a spanner in the works, catching Najibullah (10) off his own bowling to further upset Afghanistan. Nonetheless, Asghar, much like his innings on Tuesday, was unperturbed by the carnage around him. Alongside Mohammad Nabi he kept Afghanistan ticking along, and the pair put on a patient 50 before Ireland wrestled back the initiative once more.

A direct hit from George Dockrell saw a quick single go awry, sending Afghanistan’s skipper back to the sheds for a 70-ball 54. Much to the fortune of Afghanistan, Rashid Khan, yet to gain much of an opportunity to show his worth as a batsman this series, decided that the time was ripe for some runs.

Afghanistan have set a target of 224 for @Irelandcricket after getting all out in 49.1 overs. @MohammadNabi007 scored 64 followed by Asghar Afghan and @rashidkhan_19 who scored 54 and 52 runs, respectively.#AFGvIRE pic.twitter.com/vs28HUF1B7

The two spinners added 86, with Nabi going to his 13th ODI half-century. While Rashid endured a slow start, a flurry of hits off Rankin and Dockrell saw him accelerate, and while Nabi departed for 64, Rashid ensured that he would be the third half-centurion of the innings, a single off Rankin’s final over taking him to the landmark.

Afghanistan were bowled out for 223 with Rashid the last man out, handing Dockrell a solitary wicket. Cameron-Dow was the key man for the Irish, collecting career-best ODI figures of 3/32 from his 10 overs.

Ireland seemed to be on course for a solid start, till a splurt of wickets, shared by Mujeeb Ur Rahman and Alam, saw Ireland reduced from 31/0 to 33/3 in the space of seven balls.

Simi Singh and Kevin O’Brien guided Ireland back on course, putting on 33 before an attempted sweep from Singh (20) only saw to his stumps dismantled via the wily spin of Rashid.

Dockrell (8) perished to Naib, and the stage was set for Alam to trample over any Irish hopes of a resurgence. The 26-year-old’s tight lines saw him rattle the stumps of Stuart Poynter (4), O’Brien (26) and Murtagh (0). A hat-trick was averted by Rankin, and while Ireland managed to scrape themselves past 100 to avoid any further embarrassment, Nabi collected the final wicket to bring an end to proceedings.