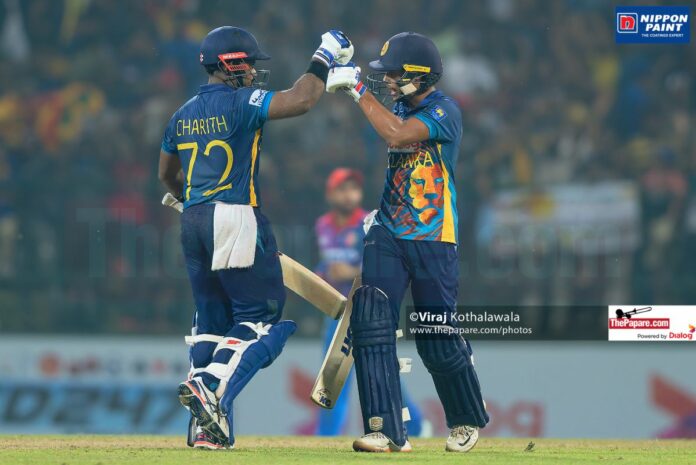 Charith Asalanka and Dunith Wellalage added an unbroken 65 runs for the 7th wicket to take Sri Lanka to a 4-wicket win over Afghanistan in the 3rd and final ODI match in Pallekelle on Wednesday.

Asalanka, played a gem of an innings, unbeaten 83 runs off 72 deliveries whilst Wellalage made a crucial 21-ball 32 as Sri Lanka chased down 314, the highest ever successful run-chase in Pallekelle as well as in Sri Lanka. Earlier, Afghanistan opening batter Ibrahim Zadran made Afghanistan’s highest-ever individual score – 162 off 138 balls as the visitors posted 313 for 8 after opting to bat first.

Ibrahim Zadran and Najibullah Zadran added 154 runs off 141 balls for the fourth wicket which set the platform for the Afghans. Apart from Ibrahim’s excellent 162 – the highest ever ODI score by a visiting batter in Sri Lanka, Najibullah made a 76-ball 77.

This is the 3rd century for 20-year-old Ibrahim Zadran and the second in the series. He has only played 8 innings so far in his short ODI career. He reached his milestone in the 100th ball he faced and then score the remaining runs in the latter stages of the innings in just 38 balls.

Rahmanullah Gurbaz chopped one onto the stumps early in the innings. Rahmat Shah and Hashmatullah Shahidi did not do much damage to the score as Sri Lanka started off well with the ball, especially the pacers – Kasun Rajitha and Asitha Fernando.

Afghanistan were 57 for 3 in the 15th over when the two Zadrans started their partnership. Since then, the visitors never looked back as they completely took the attack to the Lankan bowlers.

After Najibullah fell in the 38th over, Ibrahim made sure the scoring rate stays on par for a score more than 300. Ibrahim’s excellent knock had 15 fours and 4 sixes. Afghanistan added 87 runs in the final 10 overs to set up the 3rd highest ODI total for Afghanistan.

Sri Lanka lacked penetration and discipline in their bowling effort, especially in the middle overs. Seamer Kasun Rajitha picked up 3 wickets for 60 runs, whilst Wanindu Hasaranga proved expensive, giving away 67 runs off his 10-over quota for his two wickets.

In reply, Sri Lanka got off to a brisk start with Kusal Mendis and Pathum Nissanka adding 101 for the first wicket. Mendis played with freedom but failed to clear deep mid-wicket as the senior statesman Mohammad Nabi broke the stand. Mendis’ 61-ball 67 had 8 fours and 1 six.

Rashid Khan was brought into the attack, and he immediately struck with the wrong un’ to castle Nissanka and Dhananjaya De Silva in quick succession as Sri Lanka lost 3 quick wickets for just 15 runs.

Skipper Dasun Shanaka and Asalanka kept the hosts alive in the chase with a vital 79-run stand for the 5th wicket. Shanaka struck five fours in his 44-ball 43.

Afghanistan needed a breakthrough, and it was Rashid Khan once again, castling Shanaka with a peach of a delivery. Wanindu Hasaranga became Rashid’s fourth wicket when he was caught behind in the very next over as Sri Lanka slid to 249 for 6 in the 44th over.

Young Dunith Wellalage joined Asalanka and they took Sri Lanka home with a brilliant stand for the 7th wicket.