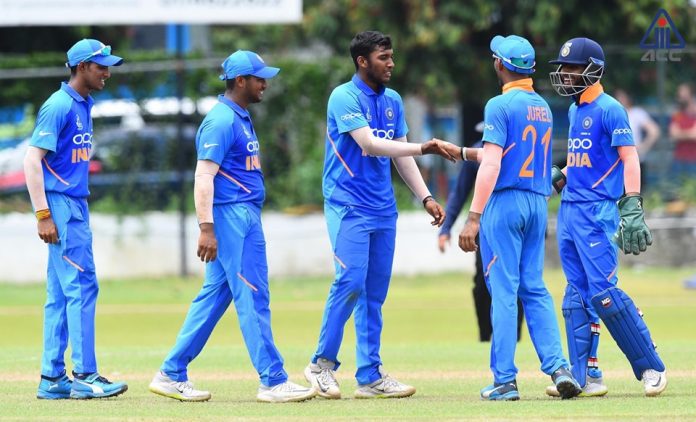 India U19s held their nerve to complete a nail-biting run chase vs Afghanistan in the group A fixture of ACC U19 Asia Cup 2019 at CCC grounds, Colombo as they secured the top spot in the group while Pakistan U19s recorded a thumping win against Kuwait at Tyronne Fernando Stadium, Moratuwa.

India U19 Vs Afghanistan U19

The battle for top spot in group A started with Afghanistan U19 skipper Farhan Zakhil opting to bat first after winning the toss in Colombo. Skipper Zakhil and Sediqullah Atal provided a perfect opening partnership for Afghanistan, adding a 51-run partnership in the first 10 overs.

After Zakhil’s dismissal as the 1st wicket, another 5 quick wickets fell with a stunning performance by the Indians, reducing the opposition for 6-68 inside first 20 overs. Lower order contributions from all-rounder Abidullah Taniwal and wicket keeper batsman Mohammad Ishaq who scored 39 and 14 respectively, guided Afghanistan U19s to 124. Left arm seamer Sushant Mishra and left arm orthodox spinner Atharva Ankolekar shined with the ball for India U19s, sharing 9 wickets between each other.

In reply, India were in control of the first 21 overs, scoring 80 runs for a loss of just 1 wicket of Arjun Azad; last game centurion. But with the departure of the settled pair, Salil Arora and Shashwat Rawat, a spectacular collapse left India at 7/106. Chinaman Noor Ahmed was the chief destroyer as he sent 4 Indian batsmen back to the dressing room in no time.

Finally, a 8th wicket partnership of 22 runs between Karan Lal and Purnank Tyagi guided India u19s to a narrow win by 3 wickets to top the group. They will play against the 2nd placed team in group B, Sri Lanka or Afghanistan.

Following 2 straight defeats at the hands of India and Afghanistan and already being knocked out of the tournament, Pakistan U19s came back in a decent style to defeat Kuwait U19s by 163 runs today at Moratuwa.

After winning the toss, Pakistan racked up a massive 335 runs with the backing of 3 half centuries from Irfan Khan, Mohammad Wasim and Haris Khan. The reply innings of Kuwait never got going as they lacked the pace to catch up with the required run rate and finally bundled out for 172.

For Pakistan u19s, Qaism Akram provided the much-needed push with the ball by picking up 4 wickets.

The last two matches of the group stage will be held tomorrow, featuring Sri Lanka and Bangladesh to decide who will play against whom in the semi-finals.