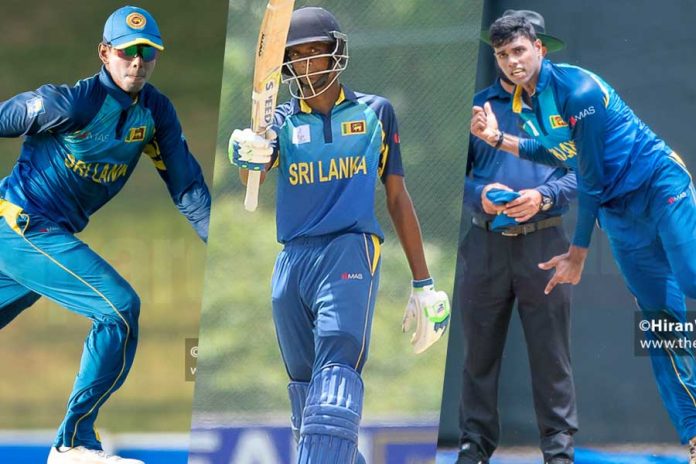 Hosts Sri Lanka registered their second win in the ACC U19 Asia Cup 2019 today, beating UAE at the Marians Cricket Ground in Katunayake by 52 runs. In the other match of the group between Bangladesh and Nepal in Colombo Bangladesh triumphed to join India and Afghanistan in the semi-finals along with Sri Lanka.

The defending runners-up were put in to bat by UAE skipper Palaniapan Meiyappan after he won the toss. Despite losing in-form opener Kamil Mishara for a golden duck in the second over, Sri Lanka recovered superbly to amass a huge total of 326, losing 8 wickets in their allotted 50 overs.

Two big partnerships from the top order and the lower middle order held the Lankan innings together as the rest chipped in with vital contributions. After number 3 Ravindu de Silva saw through the first 10 overs with opener Navod Paranavithana, in-form Ahan Wickramasinghe was involved in a 113-run stand with Paranavithana to put Sri Lanka in complete command of the game.

Skipper Nipun Dananjaya took off from then onwards as he guided his team towards the end during which he accumulated 75 runs for the 7th wicket with Rohan Sanjaya. Avishka Tharindu, Chamindu Wijesinghe and Ashain Daniel too helped Sri Lanka’s cause with handy little innings.

All the UAE bowlers finished with economies higher than 6 while off-spinner Rishabh Mukherjee claimed 3 wickets towards the end. Their run-chase was often dented by crucial blows from the Lankan bowlers.

Having scored just 105 runs at the half-way stage with 4 wickets down, UAE were given some hope as Ansh Tandon and Osama Hassan scored 111 runs for the 5th wicket in 16.5 overs. With the main bowlers being unable to break the threatening stand, skipper Dananjaya took the responsibility himself and dismissed Hassan to take the momentum back towards Sri Lanka.

From then onwards it was all about Sri Lanka as they kept bowling tight lines to leave UAE 52 runs behind the required target by the 50th over. Paranavithana claimed 4 wickets including 3 wickets towards the end. Sanjaya and Dananjaya picked up 2 wickets each while pacie Chamindu Wijesinghe took 1.

15-Year old Yasiru Rodrigo gave away just 29 runs in 8 overs as he replaced Dilshan Madushanka who was apparently rested to keep him fresh for the tougher games ahead.

Nepal’s 261 at the P. Sara Oval proved to be insufficient against Bangladesh as they chased it down in 49.2 overs losing just 4 wickets. Opener Pawan Sarraf and Sandeep Jhora made 81 and 56 respectively for Nepal as they helped their team put a competitive score on the board after they were put in to bat first.

Nepal in the defense put Bangladesh under pressure early after sending both openers back to the hut in just 5 overs. However Bangladesh came back brilliantly as the following four batsmen cruised towards the victory line.

Mahmudul Hasan and Towhid Hridoy started off the fight back with a 79-run stand followed by a 34-run stand between Hridoy and skipper Akbar Ali. Ali remained unbeaten on 98 along with Shamim Hossain when Bangladesh reached the target and secured a place in the Semi Finals.

BANGLADESH U19 WON BY 6 WICKETS

Who will meet who in the semi-finals will be decided on the 10th after the Sri Lanka vs Bangladesh game as the winner of that match is set to meet the loser of tomorrow’s India vs Afghanistan game.