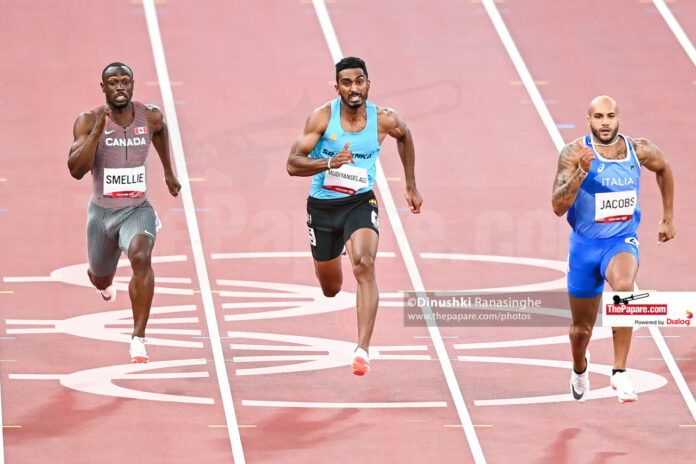 With the top 3 and best 3 finishers of the 7 heats set to progress through to the semi-finals of the event, Sri Lanka’s sprint sensation had his work cut out going into the race as he lined up in lane 5.

He got off the blocks fast but could not push through to the front of the pack, eventually having to settle for 6th place in the heat. Lamont Jacobs took first place in his heat, with an Italian National Record of 9.94.

Abeykoon’s timing of 10.32 placed him in 42nd position overall, from 59 sprinters, with Andre de Grasse from Canada getting through with the fastest time of 9.91.

24 athletes progressed, with slowest of the qualifiers running a 10.21.

Abeykoon was visibly disappointed when speaking to the media after the race, expressing that he wanted to get in a better time than he had.

The sprinter’s personal best stands at 10.15s, which is also the National Record in the event. If he had managed to make his way through the 1st Round, he would have become the 1st Sri Lankan to progress to the semifinals of the Men’s 100m at an Olympic Games.

With no Usain Bolt in contention in Tokyo, for the 1st time in 13 years, the event has no clear favourites, with de Grasse, Trayvon Bromell and Yohan Blake the only well-known sprinters in the race.

The Legend of Lucky Rogers