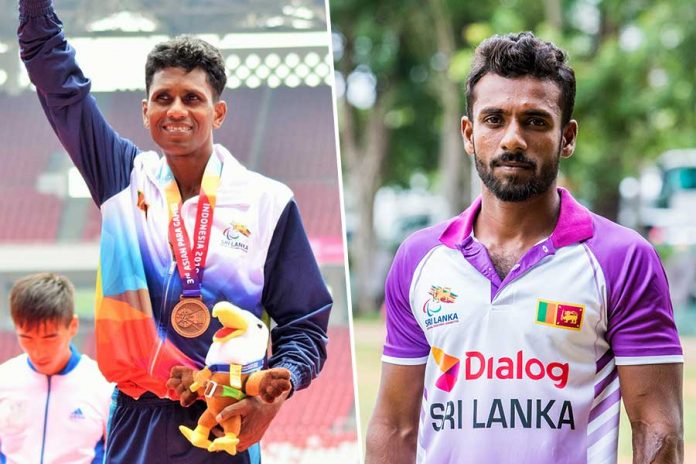 Three medals were added to the Sri Lankan medal tally at the Asian Para Games 2018..

Seven Sri Lankan track and field athletes participated in five finals today and clinched a Gold and a Silver medal. 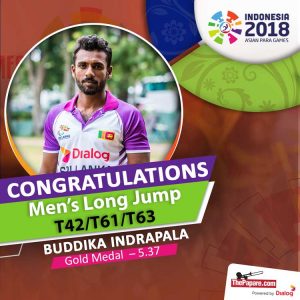 Buddika Indrapala who was a member of the all Sri Lankan podium on the opening day winning Bronze in the Men’s 100m T42/T63 event collected his second medal of the championship winning Gold in the Men’s Long Jump T42/T61/T63.  It was a dominant show by Indrapala who was, a class apart from the rest of the athletes. Indrapala’s first two jumps were measured at 5.37m which was the best performance of the competition while his next two attempts were measured at 5.30m and 5.20m. Vijay Kumar of India who was placed second could only clear a distance of 5.05m while third placed Mulyono Mulyono of Indonesia was placed third with a best attempt of 4.89m. 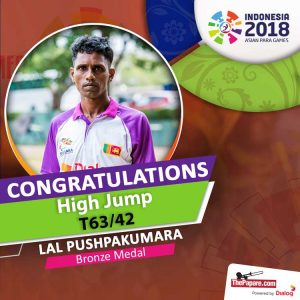 High Jumper Lal Pushpakumara secured the Bronze medal in the Men’s High Jump T64/44 clearing 1.76m. In a major upset Asian record holder in the event Toru Suzuki who had cleared 2.02m at the Rio Paralympics had to be satisfied with a silver medal only managing to clear 1.89m. Temurbek  Giyazov of Uzbekizthan cinched Gold managing to clear 1.95m.

Sri Lanka has now gathered up 10 medals in the competition and are ranked 14th in the overall medal tally. China lead the medal tally having amazed 193 medals while Republic of Korea is in second place with 92 medals ahead of Iran who have gathered 80 medals.