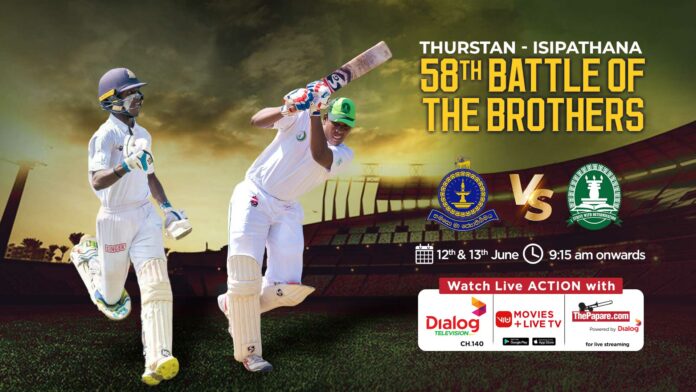 The 58th edition of the “Battle of the Brothers” Cricket encounter, played between Thurstan College and Isipathana College, is set to be held on the 12th and 13th of June at Sinhalese Sports Club Grounds, Colombo.

The 58th Battle of the Brothers encounter was supposed to be played last year, but it was postponed indefinitely due to COVID-19 outbreak.

Thurstan College has had the upper hand in the history of the encounter as they have secured 6 wins so far, while their opposition Isipathana College have tasted only 4 victories in the past. 47 encounters have been ended as draws in 57 completed encounters of this historical battle.

This year, Thevindu Dickwella will lead Isipathana College, while his counterpart in the opposing camp will be Ranesh Silva, who will also don wicket-keeping duties for Thurstan College.

All the action from the 58th Battle of the Brothers will be brought to you live on ThePapare.com, Dialog TV Channel No 140 and Dialog Viu app from 9.15 am onwards on the 12th and 13th of June.