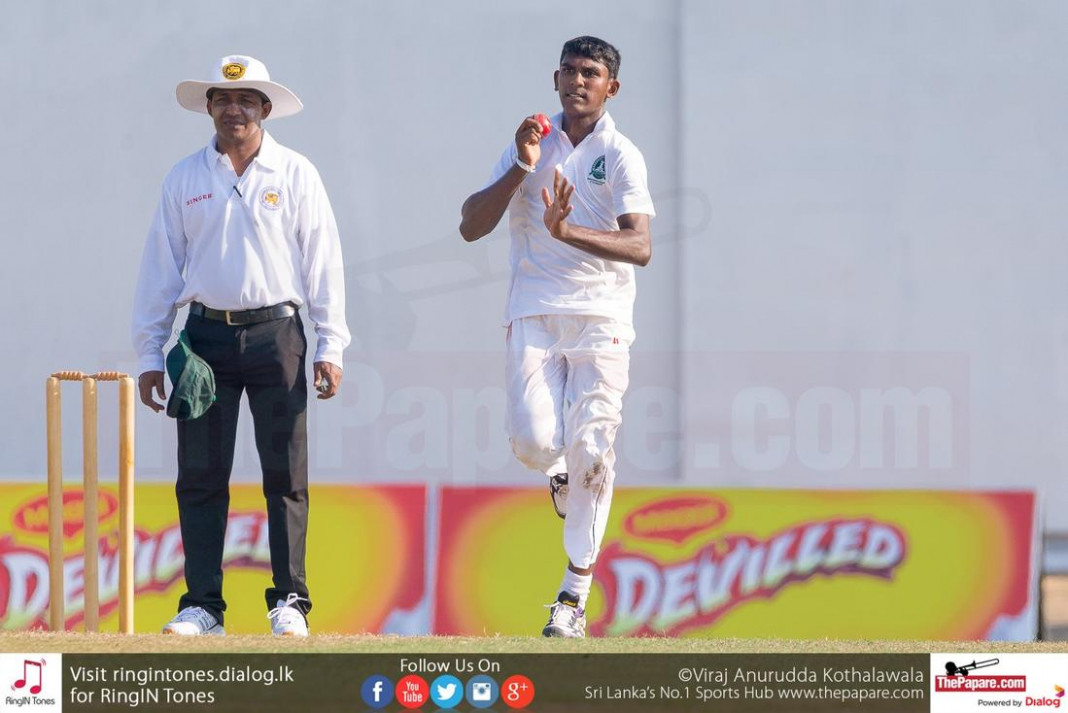 53rd Battle of the Brothers ended in tame draw at SSC today with underdogs dominating both days with bat and bowl in hand.


Day one was all about Kasun Abeyrathne, opening batsman of Thurstan College. He was unbeaten on 125 and at the other end he had Imesh Viranga unbeaten on 22 and overall total at 252 for the loss of 3 wickets.

Isipathana started off with Niranjan Wanniarachchi but he proved to be expensive in his morning spell. Skipper Salinda Ushan turned to his premier spinner Pramod Maduwantha and he delivered. Imesh was stumped by Vishad for the bowling of Pramod and that commenced the downfall for Thurstan College. Pansilu Deshan was sent back to the pavilion by Lahiru Dilshan, which was his first wicket of the match after bowling almost 35 overs. Kasun Abeyrathne was stranded at one end while wickets fell on the other end. The fall of wickets affected his batting and ultimately he was caught LBW to the bowling of Lahiru Dilshan. He was only 4 short of scoring the highest ever individual score by any batsman in the big match. The very next ball Thushal Masdushanka lost his wicket which forced Thurstan to declare their innings at 291 for 8. Thurstan losing 5 wickets for just 39 runs in the morning session.

Isipathana came on to bat an hour before the lunch break. Salinda Ushan opening the batting failed to fire as he was sent back to the pavilion by Nipun Lakshan. Heshan Fernando coming in at first drop fell shortly afterwards in similar fashion to the bowling of Nipun. Opening batsman Kalana Perera got himself to double figures and gave away his wicket leaving Isipathana at 15 for the loss of 3 wickets in 9 overs. At Lunch they were struggling at 24 for the 3 wickets.

Vishad Randika and Sanjula Abeywickrama steadied the ship for Pathana after lunch. Vishad showed some dominance before he was dismissed by a brilliant in-swinger by Isitha Wjesundara for a well made 43 runs. The batters kept coming out of the Pathana hut as Sanjula was joined by Pramod Maduwantha. Both of them have already reached 1000 runs this season and they had to fire for their school. At tea they were 111 for the loss of 4 wickets in 37 overs.

Kasun steers Thurstan away from danger

The second session was all about reconciliation for Isipathana College after the horrible start they got before lunch. Sanjula and Pramod put up a good partnership before Sanjula was run out for 75 runs. Thurstan got the breakthrough they wanted and they came back strongly in third session with flurry of wickets. Dilan Madushanka was the pick of the bowlers in the third session with figures of 3 for 63. Pramod was stranded at one end and he had to bat out the remaining overs which he did successfully. At stumps Isipathana consolidated at 222 for the loss of 8 wickets in 78 overs.

This is another brilliant example of the uncertainty of cricket. The stats clearly stated that Isipathana were favorites but it was Thurstan who outclassed this highly talented Isiapthana side. The Limited overs encounter between these two teams will be held on the 13th of March at the P Sara oval.