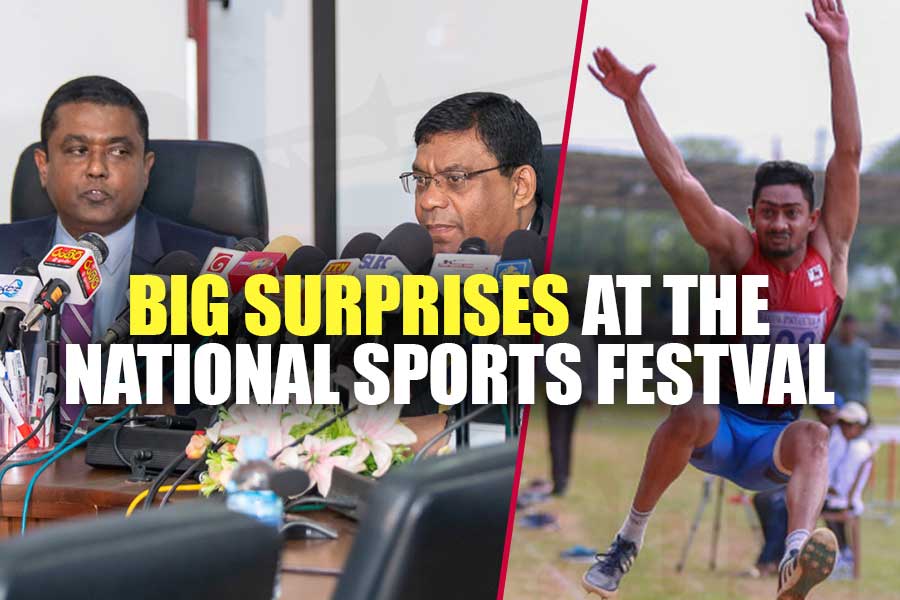 The 45th National Sports Festival will be drawing to a close with a bang in Badulla from the 24th to the 27th October, with the athletics meet planned at a grand scale. Sri Lanka Cricket too has come forward with some exciting awards for the two best athletes of the tourney.

A media conference to discuss further details on the upcoming Sports Festival as well as the main event at the end of the year, the South Asian Games 2019 was conducted yesterday (16) with the presence of officials from the Ministry of Sports and the Department of Sports Development.

From the opening ceremony on the 24th evening at the Vincent Dias Grounds in Badulla, around 2,100 athletes will go through 3 more days of competition, all vying for big prizes at the end of the meet. Honorable Prime Minister Ranil Wickramasinghe is expected to join the Opening ceremony proceedings on the eve of the meet while the Honorable President of Sri Lanka Maithreepala Sirisena will join the closing ceremony.

Secretary of the Department of Sports Development, Chulananda Perera along with his Director General Dhammika Muthugala, expressed that this year’s winners will receive the best rewards they’ve given out so far.

While last year’s winners in the individual events received a sum of Rs. 7,500 for a first-place finish, the department has been able to double-up this time with a Rs. 15,000 giveaway. Second place will receive Rs. 10,000 while a bronze medalist will walk away with Rs. 6,000.

Each athlete who will be awarded with Outstanding awards will also receive a cash reward of Rs. 20,000.

Three new reward announcements were also made Director General Muthugala, stating that for every Sri Lankan record renewed at the meet, the athletes will be awarded with Rs. 100,000 for their efforts, while a further Rs. 50,000 cash prize will go to each New Meet record.

Strong 18 to represent Sri Lanka at the World Military Games

As if this wasn’t enough, Muthugala announced that the Sri Lanka Cricket Board has come forward to sponsor two motor vehicles for the two Best Athletes of the 45th National Sports Festival Athletics meet.

Muthugala further assured that the Vincent Dias Stadium in Badulla has been under strict renovations, overlooked by a team of officials of the Sports Development Department, and that the ground conditions are seemly for the athletes to perform at their best.

The stadium is also being equipped with flood lights as a backup plan in case of weather interruptions.

With Badulla locked and loaded, the attention shifted towards the more important details of the South Asian Games 2019, scheduled to take place in Kathmandu & Pokara, Nepal from the 1st to the 10th of December.

Sri Lanka will be participating in 27 different sporting disciplines at this year’s Games with 605 athletes in total taking the field. In the 2016 edition of the Games, Sri Lanka managed to bring back 25 Gold Medals, 63 Silver and 98 Bronze medals.

South Asian Games 2019 back on track

The Department expects an increase in this number this year, by at least 10 more Gold medals, 75 Silver medals and 125 Bronze medals.

“I’ve told the athletes that it is either death or medal at the Games. There is no in-between. We expect at least 35 Gold Medals from our contingent this year” said Muthugala with more hope than confidence.

Along with the 605 athletes that will take to Nepal, a further 200 technical officers, 95 coaches, 15 physios, 10 doctors, 5 motivational coaches and 15 separate officers who will each be given a task to observe the proceedings and report back with an analysis of the tour, will be at hand.

“We will be sending 15 Observational Offices on the tour this time, each with a specific assignment. We will be spending a lot of funds and we want to make sure we reap maximum benefit from it. The officers will be our third eye, reporting back with the pros and cons of the tour as a whole” opined Muthugala on the inclusion of the Observational Officers.

Pre-tour, a total of Rs. 23 Million were distributed to the 27 Sporting Bodies to cover the costs of training, nutrition, transport, kits and equipment of their players. Most players of team sports are camped and well looked after, all expenses covered by the Department of Sports Development.

A total of Rs. 344.15 million will be spent on the South Asian Games this year, which includes Rs. 34 million of the foreign coaches’ fee.

Sri Lanka has made several requests appealing the ruling by the South Asian Games committee that allows just one athlete per event from each nation and has received positive feedback from the committee verbally. They are expected to pass an official approval of the request, within the week.

Sri Lanka is also in the middle of arrangements to send certain pools, (Athletics, Swimming, Boxing etc.) a few days prior to the Games to get better equipped with the cold environment. If all goes to plan the teams are set to arrive in Nepal by the 20th November.