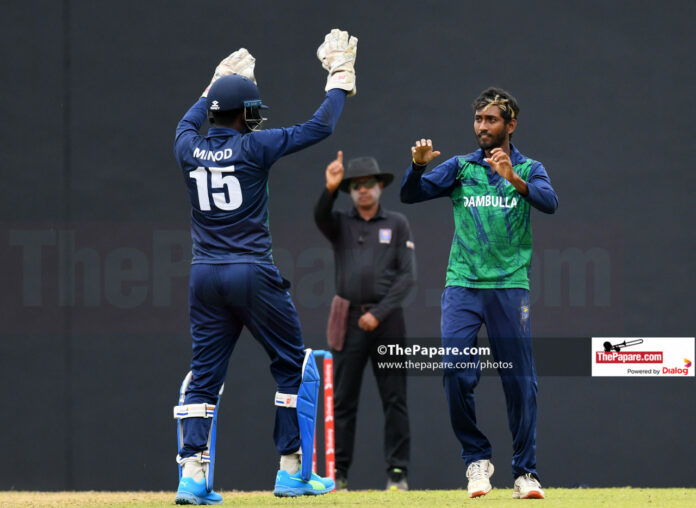 The sixth game of the 29th Singer-MCA Super Premier League 2022 was played today at the De Zoysa International Cricket Stadium in Moratuwa, between John Keells Holdings and Mode Engineering, in which the latter recorded a 2-wicket win.

The game which was previously scheduled to happen yesterday (2nd of May), had to be rescheduled to today due to inclement weather conditions. Mode Engineering won the toss and invited John Keells Holdings to take first lease of the wicket.

Despite a strong start thanks to a brilliant opening stand between Sadeera Samarawickrama (79) and Navod Paranavithana (45), JKH were unable to finish their innings on a high as they only managed a below-par score of 233 at the end of the allotted 50 overs. The combination of opening seamer Milan Priyanath and leg-spinning all-rounder Dushan Hemantha removed 7 wickets for Mode Engineering, causing the JKH middle order to collapse.

JKH seamer Malindu Shehan’s early strikes reduced Mode Engineering for 36 for 3 in their run chase, before Dilan Jayalath and Dushan Hematha paired up for Mode Engineering to rebuild their innings with a 55-run 5th wicket stand. Despite a few more late strikes which jolted the Mode Engineering run-chase, a quick-fire 47-run 8th wicket stand between Hemantha and Isuru Udana ensured a comfortable 2-wicket win for their team. Udana remained unbeaten on 37, having faced just 31 deliveries.

Mode Engineering, John Keells Holdings, Hayleys and Sampath Bank – all having won 1 and lost 1 in the 2 games they have played so far – are sandwiched between table-toppers CDB Finance (won 2 out of 2) and the last in the table, HNB (lost 2 out of 2).

The next 3 games of the league will be played on the 5th of May at 3 different venues.