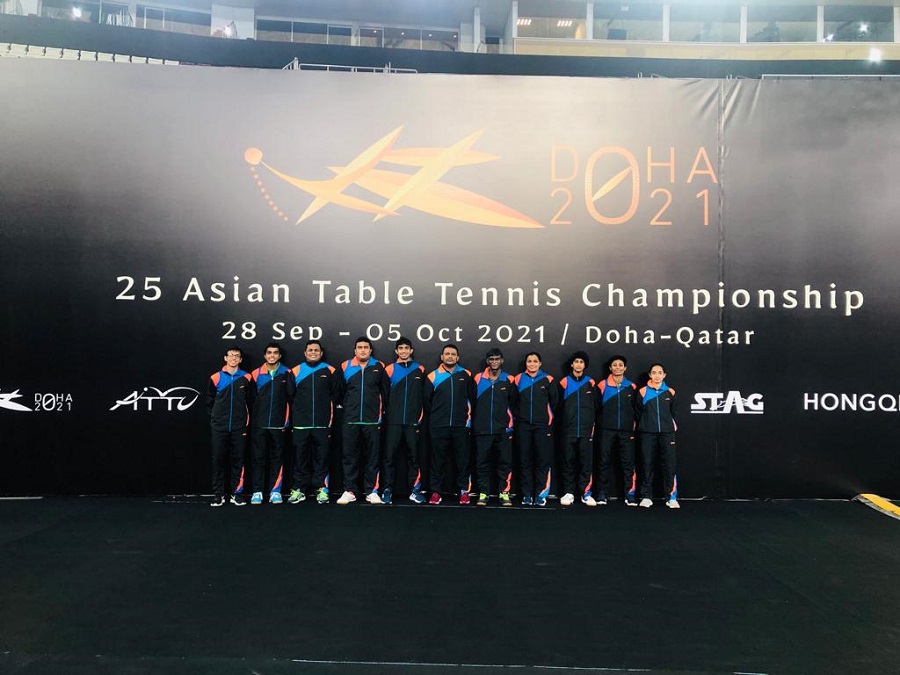 The 25th Asian Table Tennis Championship concluded with decent results for the Sri Lankans. Chameera Ginige and Ishara Madurangi led the Men’s and Women’s teams at the Team events in Doha, Qatar.

The Asian Table Tennis Championships served as the main Qualification Games for the 2022 World Team Championships. The World’s best ranked countries took part in the Games in Qatar and Sri Lanka had their sights on qualifying for the next big Games.

Doha proved to be a much-needed getaway for Sri Lanka as local and international meets have been at a standstill for well over a year. With limited training and prep, the 9 paddlers that took part did well to finish the Games finishing 18th and 12th in the men’s and women’s categories respectively.

The Men’s Team was able to finish 18th out of 28 Teams in 6 Groups. Sri Lanka was grouped up with Thailand and Bangladesh in which they finished 2nd in the standings. Sri Lanka defeated Bangladesh 3 – 0 and fell short 1 – 3 to Thailand.

Sri Lanka moved on to play host nation Qatar to progress further in the Knockouts but lost the tie 3 – 1. Playing for the 17th position, Sri Lanka suffered an unfortunate loss at the hands of Indonesia 3 – 2 and settled for 18th place overall.

In the women’s draw, Sri Lanka started off in Group 4 with Kazakhstan and Bangladesh. Like the boys, they finished 2nd in the Group standings, defeating Bangladesh 3 – 0.

The ladies had a stellar run against Jordan in the 11th – 14th play-off with a 3 – 0 win. Playing for 11th, Indonesia got the better of the Lankan ladies 3 – 0 and Sri Lanka took home 12th overall.

The best Singles stint belonged to Muthumali Priyadarshini who was able to reach the Round of 16 defeating some seasoned players along the way. Next best were Thanushi Rodrigo, Bimandee Bandara and Senura Silva who managed to scrape through to the top 32. Ishara Madurangi, Chameera Ginige and Nimesh Ranchagoda finished next in the Round of 64.

While the Qualifying teams for the 2022 World Championship have not yet been announced, the Lions are hopeful for qualification for both Men’s and Women’s teams.