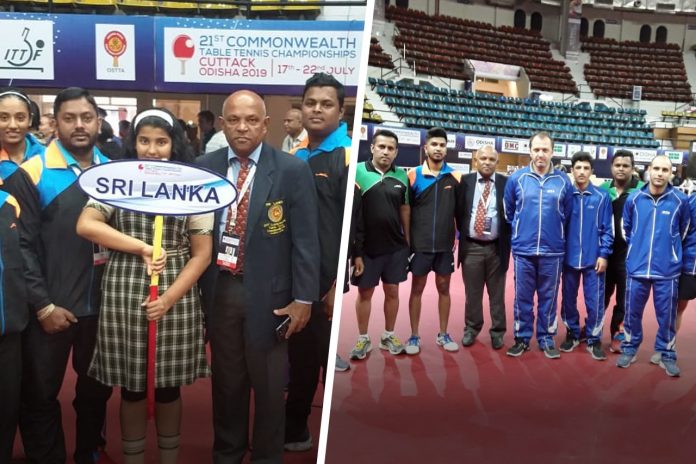 The Sri Lankan paddlers were in tough competition on Day 1 at the Jawahar Lal Nehru Indoor Stadium, India at the Odisha 2019 Commonwealth Table Tennis Championship.

Sri Lanka was represented in both the Men’s and Women’s categories, and after a tough fight, both teams managed to qualify for the Super 08 Round. The Men’s Team consisted of Former Champion Rohan Sirisena, Krishan Wickkramarathne, Nirmala Jayasinghe and Milinda Lakshitha. The Women’s team was formed with Ishara Madurangi, Bimandee Bandara, Chamathsara Fernando and Jithara Warnakulasuriya

Vs. England (1st Round Matches)

England took an unassailable 3-0 lead against Sri Lanka, in the 1st Round opening match. In the opening singles, Former National champion of Sri Lanka Rohan Sirisena lost to the England player Mcbeath David, with the scores reading scores read as 05/11, 9/11, 3/11. In the Second Singles, Walker Samuel wins over Krishan Wickkramarathne, as the scores read as 11/9, 11/7, 11/06.

Vs. Cyprus (1st Round Matches)

Vs. India (1st Round Matches)

Vs. South Africa (1st Round Matches)

The Sri Lankan Women’s team however managed to win against South Africa 3-0 in the overall.

The super 08 round groups