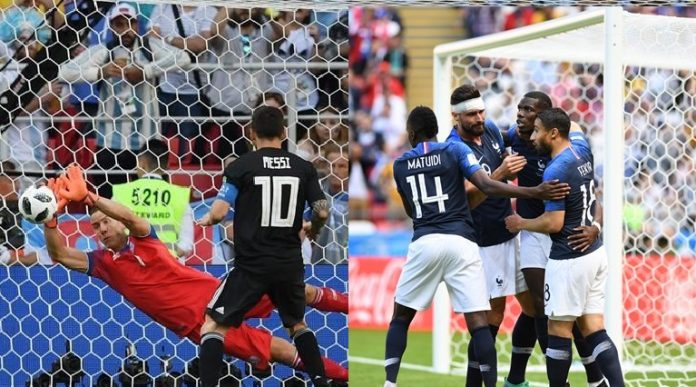 Lionel Messi missed a penalty as Iceland drew with Argentina while France, Denmark and Croatia defeated Australia, Peru and Nigeria respectively on day 3 of the 2018 FIFA World Cup.

An imperious performance from Cristiano Ronaldo, which included a hat-trick, saw Portugal fight back to earn a 3-3 drawn …

Croatia came through with the points in an intriguing affair with Nigeria in a 2-0 win at the Kaliningrad Stadium, Kaliningrad.

With Argentina and Iceland playing off a draw in the groups other game gave added incentive for both teams to play for a win and take control of the group.

Early stages of the first half it was the youngest team in the World Cup Nigeria who came off the block flying with some flowing moves. Croatia with a strong midfield pair of Luka Modric and Ivan Rakitic took control of the game and it was the Croatians who were penetrating.

First shot in anger was from Ivan Perisic however failed to test the nineteen-year-old Nigerian keeper Francis Uzoho.

The opening goal came when Mario Mandzukic flicked on header from a corner which was diverted into his own net by the Nigerian defender Oghenekaro Etebo which gave the Croatians a deserving lead.

In the second half it was Nigeria who once again had a great start with number of corners coming from the right flank. First effort on target came from Nigeria on the hour mark with a header from Odion Ighalo straight at Danijel Subasic.

As it was in the first half Croatia took control of the game midway through the second half with majority of the possession and penetrating runs.

Croatia got the goal to kill the game when William Ekong wrestled Mario Mandzukic to the ground awarding a penalty. Luka Modric converted from the spot. Croatia with a number of experienced players kept possession effectively to deny Nigeria any kind of chance to get back and earned a well-deserved win.

Denmark managed to stay defensively strong to hold onto a 1-0 win despite Peru’s continuous chances at the Mordovia Arena, Saransk.

Early on Peru broke through the Danish defense and got a powerful shot off on the edge of the box, but keeper Kasper Schmeichel made a brilliant save. Denmark then got on the front foot, threatening the Peru box on quite a few occasions and winning a few continuous set pieces.

France looks the firm favourites to top the group with Peru, Denmark and Australia, all three who entered the competition via play …

In the 43rd minute Peru’s Christian Cueva was taken down in the box in what looked like a clear penalty, however referee waved play on until apparently being informed by the VAR officials to check the replay, and when referee Gassama Bakary checked the footage, he awarded Peru the penalty.

Cueva stepped up to take the penalty looking nervous and took a stuttering run up and ended up blasting the ball way over the bar wasting the chance to put his team in the lead on the brink of half-time.

Peru were presented another golden opportunity to take the lead but Cueva took one touch too many inside the box before passing it onto Edison Flores whose untidy finish went wide.

In the 59th minute Denmark, once again on the attack passed the ball to Christian Eriksen who gave a perfectly timed through ball to Yurary Poulsen who with a calm finish beat the keeper to give Denmark the lead.

Peru almost immediately responded with an equalizer when Flores took a strong shot from inside the opposition box, but Schmeichel, in reminiscence of his legendary father, made a world class save to prevent the goal.

The 78th minute produced another close equalizer for Peru when Cueva passed the ball to Paolo Guerrero inside the box who went for a backheel but the ball went just inches wide of the post.

Peru with chance after chance yet again had Yoshimar Yotun who took the shot off but Schmeichel made another brilliant save with his foot.

Eriksen then got a shot off on the other end but keeper Pedro Gallese made a great save to keep his team in it but Peru ran out of time.

Man of the Match – Yurary Poulsen

Lionel Messi missed a penalty as Iceland earned a famous 1-1 draw against Argentina in a group D encounter at the Otkrytie Arena, Moscow.

Argentina dominated play from the opening whistle with a couple of Lionel Messi free-kick’s causing problems for the Iceland defense. A great opportunity fell to Birkir Bjarnason, after a defensive mishap from Argentina, but could only strike it wide with the goal at his mercy.

An imperious performance from Cristiano Ronaldo, which included a hat-trick…

A Messi long range effort was saved before Sergio Aguero struck a wonderful goal on the turn with his left foot past three defenders.

However, the lead was short lived as Alfred Finnbogason scored after Willy Caballero fumbled a low drive from Gylfi Sigurdsson at his feet.

There were a couple of penalty appeals turned down for Argentina as the South Americans dominated possession once again. Iceland sprung into life just before half time with Sigurdsson strike which went wide.

It was an uneventful start to the 2nd half up until the 63rd minute when Hordur Magnusson clumsily fouled Aguero inside the box but Hannes Halldorsson divided to save the resulting penalty from Messi.

With around 13 minutes remaining Cristian Pavon was brought down inside the penalty box by Birkir Saevarsson but the referee denied any claims and even opted not to consult VAR. There were a few other chances which fell to Messi but was frustrated by the stout Iceland defense.

Man of the Match – Hannes Halldorsson

A late goal from Paul Pogba gave France a 2-1 win against Australia in the group C opening match at the Kazan Arean, Kazan.

Despite a hard-working defense from Australia, France mustered up courage in the 2nd half to earn a penalty kick by the first-ever VAR call-up from the referee at the FIFA World Cup 2018.

The game took off with a corner kick earned by Kylian Mbappe which ended as a near miss. A free kick attempt by Pogba was well collected by the Australian keeper Mathew Ryan.

Playing one-on-one, Ousmane Dembele sped up to the box who was stopped by Trent Sainsbury but the referee gave no free kick. Australia’s best chance came from a free-kick but Hugo Lloris dived brilliantly to parry the ball to safety.

France seemed to be completely out of the game against the stubborn Australia. However, things changed when the referee decided a penalty kick following the tournament’s first ever review of the World Cup through the VAR system.

Antoine Griezmann easily kicked to the left-hand corner and scored his 21st goal for France to give the lead. Minutes later Samuel Umtiti, gave away a penalty on the other end which Mile Jedinak, the Australian skipper, slotted in gleefully.

With time running out, Pogba wrestled his way and kicked the ball above Ryan which dropped just behind the crossbar giving France the vital lead.

Man of the Match – Antoine Griezmann