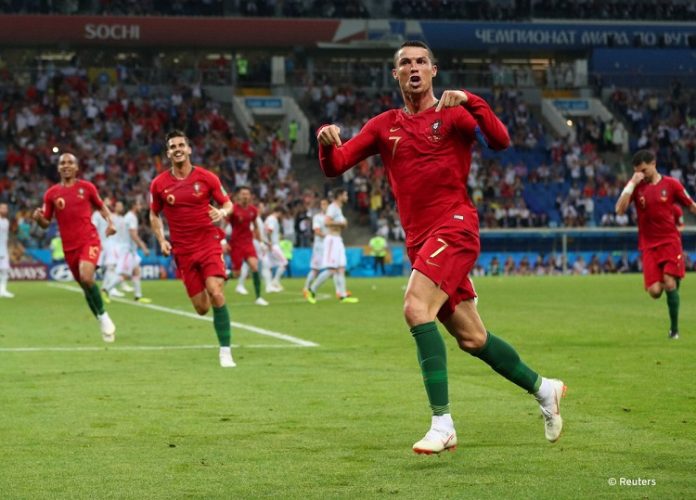 An imperious performance from Cristiano Ronaldo, which included a hat-trick, saw Portugal fight back to earn a 3-3 drawn against Spain in an all time World Cup classic at the Fisht Stadium, Sochi.

In the day’s previous matches, two late goals gave Uruguay and Iran wins against Egypt and Morocco respectively at the 2018 FIFA World Cup in Russia.

Ronaldo lights up the World Cup

With most of the pre-match talk revolving around the turmoil around the Spanish camp following the sacking of coach Julen Lopetegui, the match certainly lived up to all expectations and will probably go down as an all time World Cup classic.

Cristiano Ronaldo got Portugal off to the best start possible, winning a penalty and then converting it after being brought down in the box by his Real Madrid teammate Nacho in the 4th minute.

In an action-packed game, Spain wasted no time in hitting back as Diego Costa shrugged off Pepe and created just enough space to stick the ball in the corner of Rui Patricio’s goal to draw them level.

Isco followed up the equalizer with a thunderbolt that rattled the Portuguese crossbar, but unfortunately did not cross the line as Spain began to wrestle control of the tie. Spain continued to move the ball immaculately across the pitch with the likes of David Silva, Iniesta and Isco playing a central role in their game

Despite the Spanish domination, Cristiano Ronaldo put Portugal back in front on the brink of half time as his low drive squirmed past David De Gea in to the back of the net. The uncharacteristic mistake from one of the world’s best goalkeepers was the final talking point of a thoroughly entertaining half of football.

Spain wasted no time in getting themselves back level as within 10 minutes of the restart, Diego Costa bundled the ball home from point blank range. A David Silva free kick was headed back across the face of goal by Busquets for the Atletico Madrid man to draw them level.

Spain then took the lead for the first time a short while later as Nacho made amends for conceding the penalty by hitting an exquisite low volley from outside the box into the net off the post.

Portugal rang the changes bringing on the likes of Ricardo Quaresma and Andre Silva to try and break down the Spanish defence, but they struggled to create any chances from open play.

Spain continued to keep possession of the ball well, but just when it looked like they had the win in the bag, Cristiano Ronaldo smashed home a marvellous free kick to drag Portugal level at the death, completing his hat-trick in the process.

Both teams ultimately had to settle for a point after a thoroughly entertaining game.

Man of the Match – Cristiano Ronaldo 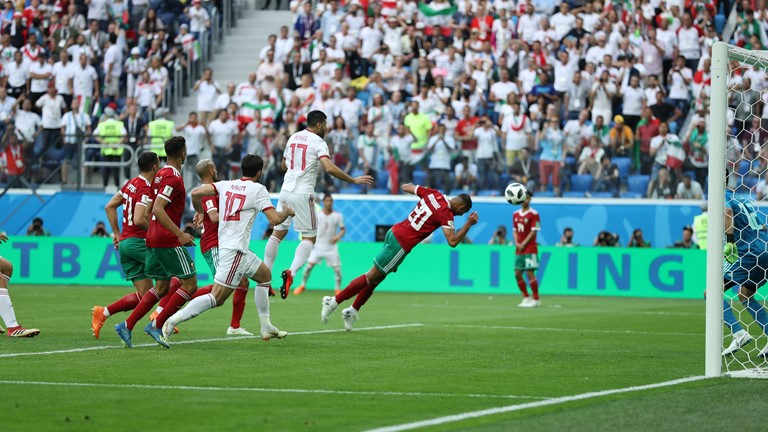 An injury time own goal from Aziz Bouhaddouz gave Iran a 1-0 win against Morocco at Saint Petersburg Stadium, St. Petersburg.

It was a lively start from the Moroccans showing great determination and earned back to back corner kicks. One of them fell to Schalke youngster Amine Harit on the edge of the box where he screwed the chance without timing the shot.

They had another opportunity to open the score sheet but Ayoub El Kaabi couldn’t find his shot on target.

In the 18th minute Morocco had their best chance of the match from a freekick as they had 3 back to back shots inside the penalty box but unfortunately all three shots were blocked by the crowded Iranian defenders.

Iran missed out from a counter attack and then the Moroccan forward Harit hit straight at the goalkeeper after skipping past a few defenders.

Just before the half time Iran found their best chance of the match but Sardar Azmoun lost his balance in a 1 on 1 situation.

The second half was not as energetic as the first half from both the sides where neither team had any significant chances to find the back of the net.

In the 80th minute Hakim Ziyech skillfully timed a perfect half volley to the left bottom corner of the post but the Iranian keeper gave his everything to save it.

There was late drama in injury time as Iran received a free kick in the 94th minute and Morocco’s Aziz Bouhaddouz tried to clear it out from the near post but ended up heading it into their own goal post as Iran secured their 3 points of the game.

Man of the Match – Amine Hart

Uruguay edge past ‘No Salah’ Egypt

Uruguay pulled off a late winner to secure a narrow 1-0 victory over Egypt in Group A at the Ekaterinburg Arena, Ekaterinburg.

In what was considered by many to be the most important game of the group, Mohamed Salah had to settle for a spot on the bench as he is apparently yet to recover from the shoulder injury he suffered in the Champions League Final.

Uruguay favourites to top the group while the hosts, Russia look to capitalize…

Edinson Cavani had the first shot of the match on target but the Egypt keeper Mohamed El Shenawy went down and made a good save.

Suarez broke into the box in the 13th minute and got a shot off but was just wide of the target.  In the 16th minute Egypt were awarded a free-kick just outside the opposition box, but they failed to make the most of it.

Egyptian player went down on the edge of the box in a blatant dive as the replays showed that the defender had not even touched him, yet the referee did not book the player.

As the game progressed, the ball fell at the feet of Cavani on the edge of the box who took a blazing volley but an Egyptian defender leapt bravely and headed the ball away while a Luis Suárez right footed shot from close range missed the far corner.

The only major chance before the hour mark was Suarez’s shot from the edge of the 15 yard box but the keeper stood tall and made a good save to prevent the opening goal.

Ahmed Fathi then out of nowhere took a blazing strike from far out which almost caught the goalkeeper Fernando Muslera off guard, but he managed to get down in time and grab the ball.

Suarez once again got an opportunity to give his Nation the lead as he got the ball inside the box, but taking one touch too many the keeper managed to go down and smother the ball.

Cavani in the 82nd minute linked up beautifully with Suarez when Suarez headed the ball into the path of Cavani who took another thunderous volley from the edge of the box, but keeper El Shenawy made a brilliant save.

Finally in the 90th minute, Jose Gimenez leapt highest for a bullet header, off a free-kick, right into the top corner to break the deadlock right at the end.