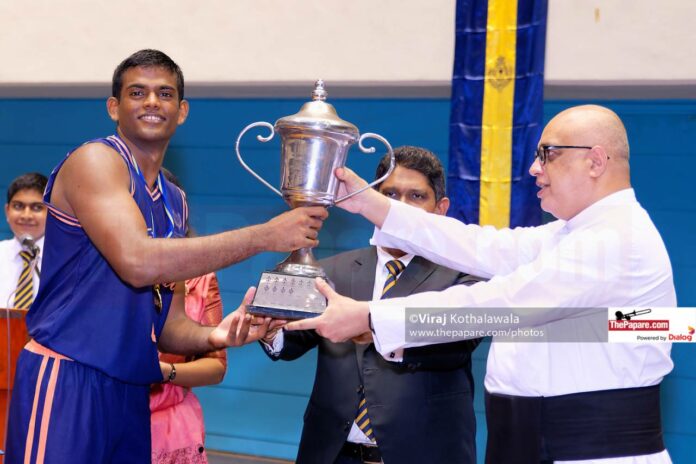 Ravindu Jayarathna did the honors by starting off the score board for Royal College Colombo as they ended the first half with a lead of 5 points. S. Thomas College stepped into the second quarter with a much better game plan, as they dominated their offense around the Centre player, Andrew Thivakumar. At the end of the second quarter, Royal College was leading with 1 point.

The third half started off with S. Thomas College scoring the first basket, and the momentum continued till the end of the third half as they took their first lead. The Reid Avenue boys were struggling in finding their pace in both offense and defense during the 2nd and the 3rd quarters. Back-to-back 3 pointers of Yehan Bulathsinghalage of S.Thomas’ College made a huge impact on their game.

Both teams entered the arena in the final quarter with a steady mind, knowing they were just 10 minutes away from the D. S. Senanayake Challenge Trophy. Royal College managed to control the game in the fourth quarter with a few quick passes under the rim, allowing them to get the first shot of the quarter. Royal College tried their luck around the ark, but they were unfortunate with that strategy as the shots did not connect to the rim, which led to turnovers. As time was running short for the Royal boys, Coach Prasanna Jayasinghe got his final time-out and shared a final few words.

As they stepped into final minute in the game clock, Royal College’s defensive screws tightened and they found their pace in offense as well. Not a single mistake was made by the Royalists, with them halting all the shots made by S. Thomas’ College on every single occasion. The last shot, which was made by Binov Sonnandara, changed the whole game as Royal College was crowned Champions at the 17th Royal- Thomas Annual Basketball Encounter.