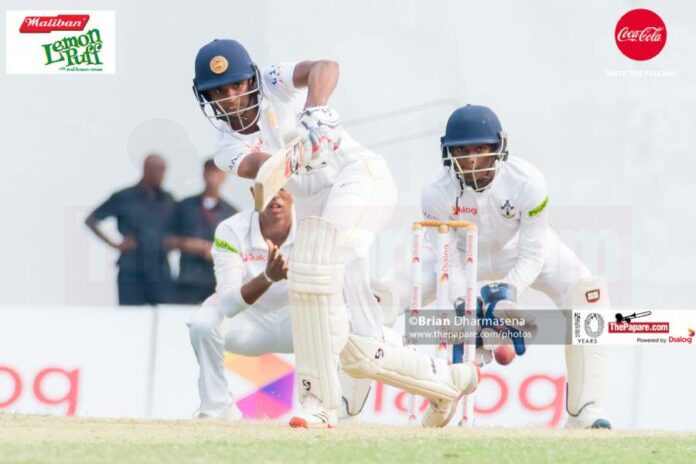 Royal College Captain Ahan Wickramasinghe brought up his second century of the season in their tournament opener against Trinity College. Three other tournament matches were played today (16).

The former Sri Lanka youth cricketer, Wickramasinghe, started off this season with a thumping double-century against the same opponents a week ago in a traditional two-day fixture. Thanks to his 118 runs, Royal College recorded a 83-run win against Trinity College to start off the one-day leg on a winning note.

Ahan’s partner in crime, Sadisha Rajapaksha, supported him with 46 runs to his name as Royal posted 239 runs using all their resources.

The Trinitians were totally outplayed once again at Reid Avenue this year. They only managed 156 runs in their chase with the help of a fifty from Ranuda Somarathna. Somarathna was impressive with the ball too as he picked up 3 for 22 while bowling.

Kavindu Pathirathna was the pick of the bowlers for Royal College as the right-arm seamer bagged 3 for 31.

Ryan Fernando led the batting at S. Thomas’ grounds today, even though he ended up on the losing side. He struck an eye-catching 77 runs in a low-scoring fiasco of a Thomian innings.

The home team found the Richmond bowlers hard to put off as they were bundled out for just 162 runs. Hansamana de Silva was the pick of the bowling as he bagged 4 wickets for just 12 runs.

Richmond College chased down the target after a few fumbles at the start. Chamath Wickramasinghe topped the batting card with a match-winning 74 runs.

The Sebastianites recorded a not-so-convincing win against the boys from Matara as both teams struggled to play Cricket at the pace of a standard limited over match. Uyanwatta Stadium saw just 324 runs at the end of 94.4 overs in the day.

Hirantha Lakshan and Sachira Rashmika picked up 3 wickets for St. Thomas’ College as they restricted the Sebastianites for 180 runs.

However, they did not have enough batting strength to go past that target. Chrishane Perera was the major destructor from St. Sebastian’s with figures of 3 for 25.

The men in maroon had a great outing against the school next door as they recorded a comfortable 6-wicket win in their tournament opener.

Zahira College were reduced to 151 runs for the loss of 9 wickets in their 50 overs. The star left-arm spinner of Ananda College, Isuru Ayesh, proved his worth picking up 3 wickets for 26 runs.

Ananda College ran past the target with 18 overs left in the game. Hansaja Jayasinghe impressed with an unbeaten 61 runs which saw his team home early.