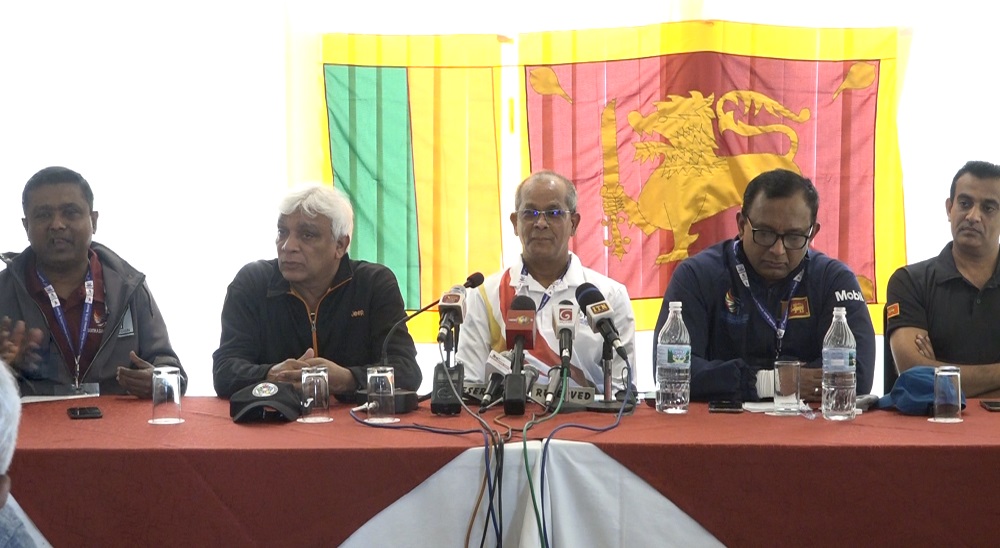 A special media conference to address matters regarding the current situation at the 13th South Asian Games in Nepal was conducted today (1st December) by Director General to the Department of Sports Development Dhammika Muthugala in collaboration with the National Olympic Committee. Secretary of the NOC, Maxwell De Silva also joined in to add further details.


At this year’s South Asian Games in Kathmandu-Pokhara, a total of 568 athletes will be playing for Gold representing Sri Lanka. Many teams have already arrived in Nepal while some are due in the next few days, including the star swim team.

The volleyball event kicked off prior to the official dates of the tournament with Sri Lanka fielding both Men’s and Women’s teams. Silver medalists in the last edition in 2016, the Sri Lankan Women’s volleyball team was knocked out of the semifinals by hosts Nepal in dismal fashion.

Director General Muthugala expressed that more than the team’s poor performance, the home team played in a more tactical and strategic manner to capture the win. However, while this particular event was a Silver medal prospect, the chances have now dropped to a Bronze, with the ladies yet to take on Maldives in the third-place match.

“After observing and analyzing the women’s volleyball match yesterday (30) we will be seriously looking into the coaching department of both the women’s and men’s volleyball teams. Both teams have been equipped with foreign coaches, so we will need to decide whether a change in order is needed” he went on to say.

Many flights carrying the Sri Lankan teams have experienced slight or large delays in landing in Nepal due to the air traffic as well as the smoggy conditions overhead. Nepal has a high rate of pollution in the air, therefore all personnel have been advised to wear surgical masks at all times.

The air pollution in New Delhi was so severe that the carrier with the Golf, Table Tennis and Fencing teams could not advance from the Delhi airport. With many delays, the teams were separated and brought to Nepal in two other air crafts.

“Although slight displeasure was experienced by the teams, this has not affected their events in any way as they are due to compete in later days” assured Muthugala.

The national athletics team, close to 60 persons, arrived in Kathmandu on the 29th of November at around 5:00pm local time. A lengthy visa and immigration process later, the teams were sent to their respective hotels. However, the Athletics team faced an unfortunate fate.

“This issue, like many issues here, is beyond our control. Initially, we (sports ministry) planned to have our athletes stationed in hotels of our picking with transport provided as well. However, the South Asian Games committee informed us later on that private arrangements will not be allowed and that they will give these accommodation arrangements for a lesser stipend to ease the pressure off the Sri Lankan contingent.

Thereafter, we have funded Rs. 73 million to the Nepal Olympic Committee through the Asian Olympic committee, with $35 per person, per day including the all the technical officers and players.”

While the arranged hotels were in the outskirts of the town in narrow passages, the shuttles carrying the athletes and luggage could not travel up to the designated hotel. Athletes were seen having to carry their luggage and walk close to 200m at approximately 9:00pm.

Dhammika Muthugala then expressed his frustrations through email to the Nepal Olympic Committee, pleading a better stay in the coming two weeks.

“We got the athletes charter flights from Colombo to Nepal as the connecting flights are rather long and is a difficult journey. Even though we did all we could from our end, the organizing in the host country has been despicable so far” said Muthugala.

Muthugala pressingly defended the allegation that 100 officials were included in the names list for SAG, taking up money and facilities from the more deserving athletes. He sternly denied this allegation and said that 17 members from the National Olympic Committee, 5 officials from the Examination department, a collective 24 from the Sports Ministry, Department of Sports Development, National Selectors, SAG management office and the Sports Medic department were included in the final list.

With this a total of 46 officials have been approved for the tour.

The opening ceremony of the 13th South Asian Games is set to take place later today (4:30pm local time). However, the lead up to this ceremonial occasion has been far from being a magical moment for the athletes and officials alike. The poor organizing of the event was to an extent where the games schedules were printed the night before, the times of the opening ceremony was informed to the contingents the night before and none of the venues of competition have been fully finished in construction.

When asked why these issues weren’t raised and attended to in the NOC’s previous visits to Nepal, General Secretary Maxwell De Silva had this to say,

“We’ve come to Nepal about three times prior to the Games. I saw how far behind the organizing committee was and informed all players and everyone involved, that this trip was not going to be a joyride. The NOC and Ministry then made a priority to get the best out of the worst scenario here in Nepal, trying to facilitate our athletes with the best hotels of the lot.

Nepal is catering to Sri Lanka in their best capacity, but we cannot change the way of Nepal. We have to take the best of the worst scenario.”

With all things considered, the only thing us Sri Lankans have to look forward to are the medals that our athletes will bring. ThePapare.com will be bringing you exclusive coverage from Nepal with photos, videos, results and more till the 10th of December!