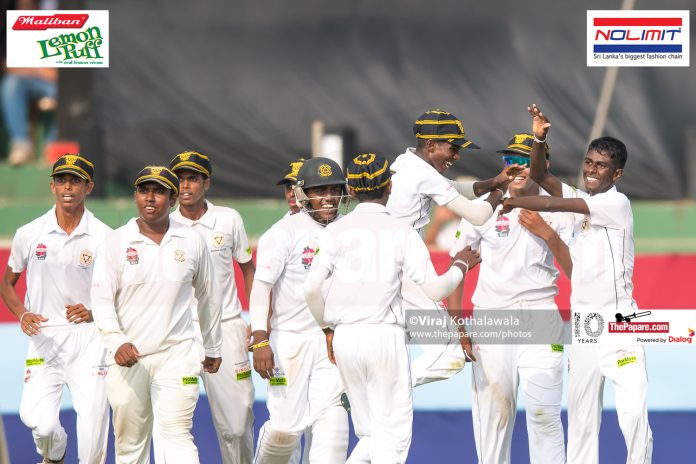 A splendid bowling performance by Kushan Madhusha and Ashen Kandambi helped Mahinda College to a strong position at the end of day 1 of the 114th Lovers’ Quarrel, the Annual Big Match encounter between traditional rivals Richmond College at the Galle International cricket stadium.

Madhusha and Kandambi were brought into bowl after the completion of the first 10 overs in the Richmond innings with the score at 34 for 1, and from there on soon had the Richmond College batsmen in all sorts of trouble. Madhusha ended the day with 3 for 15 and Kandambi 2 for 8.

At the start of the Richmond innings, openers Aditiya Siriwardhana and Vinuja Kiriella got off to a sound start by putting on 34 runs for the first wicket. However, from there on, they lost wickets at regular intervals and were 56 for 6 at one stage. Sandun Mendis, 20 not out and Sammu Vimud, 18 not out with an unfinished 43-run partnership helped Richmond College to finish the day on 99 for 6.

Earlier in the day Richmond College captain Thaveesha Abishek won the toss and surprisingly decided to put Mahinda College into bat on a wicket which looked ideal for batting. Mahinda openers Navod Paranavithana and Kawshitha Kodithuwakku got off to a flying start by putting on 58 runs for the first wicket. Later in the innings, Nipun Malinga 44 (2 boundaries and 4 sixers) and skipper Vinura Dulsara 27 batted well to take the Mahinda College score to 129 for 4, but the rest of the batsmen failed to make an impression against some tight bowling by the Richmond spinners. The last seven Mahinda College wickets fell for just 66 runs.

For Richmond, Dilum Sudeera 5 for 49, Sandun Mendis 3 for 53, and Dimuth Sandaruwan 2 for 33 bowled their hearts out to restrict the strong Mahinda batting line up.

Richmond College trail Mahinda by 98 runs with four wickets intact.  The stage seems set for a thrilling day of cricket tomorrow with Mahinda College and Richmond College both looking to muscle into a commanding position in the game – whether it be scoring runs or making early inroads into the batting line up, as batting towards the latter part of the second day will not be easy with the wicket assisting the spin bowlers.

Video – Anju Karunanayake’s crucial 70 in the Battle of the...