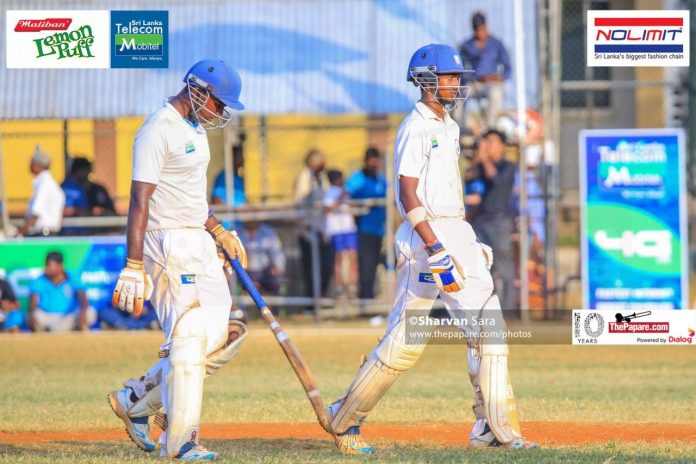 After being put in to bat first, the hosts got off to a poor start as their opening pair Thivakaran Nakeswaran and Iyalarasan Kamalarasa ran themselves out within first six overs adding only 16 runs to the scoreboard.

The number three batsman Sansajan Matheeswaran and number four batsman Sarangan Sritharan tried to steady the innings but they too were dismissed just before the lunch after building a 39-run partnership for the third wicket.
Matheeswaran made 20 runs off 44 balls with 2 fours while Sritharan contributed with 25 runs off 48 balls including 4 fours. At lunch, the hosts were 81 runs for 4 wickets with Nithusan Aniston (13) and the skipper Vijayakanth Viyaskanth (5) remained unbeaten at the crease.

After the Lunch, Aniston and Viyaskanth tried to rebuild the innings but they could not last long at the middle as both were dismissed by the 36th over. Aniston stroked 20 runs off 43 balls with 2 fours while the skipper Viyaskanth who has played for Sri Lanka U19s, top-scored with 30 runs off 38 balls including 3 fours and a six.
After their dismissals, the hosts lost two more quick wickets putting them so much under pressure at 147 runs for 8 wickets by Tea on day one. It was up to Rajclinton Rajaratnam to provide late impetus to the hosts’ innings after being unbeaten on 15 runs at Tea but he was unable to do so thus they were restricted to 150 runs in 57.3 overs.

Karishan Kuganesaran was the pick of the bowlers for the visitors as he bagged 3 scalps for just 10 runs. In addition to that, Vithushan Yogathas starred with the ball taking 2 wickets for 42 runs. In reply, Sowmiyan Naganthirarajah and Thanujan Christy opened the batting for St. John’s College but both were dismissed for cheap scores of 16 and 6 respectively.
However, the number three batsman Sukethan Antonypillai rescued the innings building a 44-run partnership with Vinojan Thiyagarajah for the third wicket. Antonypillai stroked a quick 49 runs off 51 balls with 8 fours and a six at a strike rate of 96.08.

The visitors were 118 runs for 3 wickets when umpires called stumps on day one. Thiyagarajah and Dinoshan Theivendram remained unbeaten at the crease building a 31-run partnership for the fourth wicket. Thiyagarajah made 19 runs off 56 balls with 3 fours while Theivendram made a quicker knock of 24 runs off 30 balls with 3 fours.
Vithusan Theesan (2/48) and Vijayakanth Viyaskanth (1/32) did well with the ball for Jaffna Central College sharing all three wickets fell in the visitors’ innings. The match will continue tomorrow for day two.

St. John’s College, Jaffna won by an innings and 17 runs