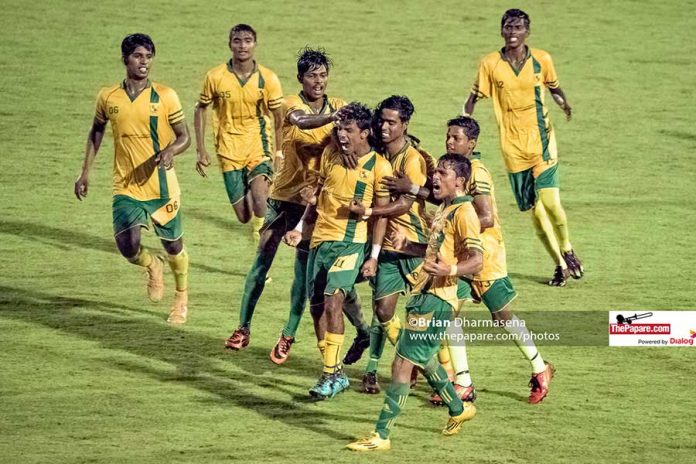 St. Patrick’s came out winners in the final quarter-final of ThePapare Football Championship 2018 beating Zahira College 5-4 on penalties after it ended 3-3 in regulation time, in a battle that had all the possible drama at the Sugathadasa Stadium.

Both teams looked to play possession football and tried a couple of attacking moves through the wings. St. Patrick’s got the first attempt on goal through a free kick from D.H.Hains which the Zahira boys managed to clear after a melee in the six yard box.

Zahira’s first chance of the came when Mohamed Aakib met a corner kick which hit the cross bar after goal keeper A.R. Kijuman got his finger tips to it.

In the 20th minute Nirmala Christeepan made a brilliant run and shot at the Zahira goal and Mohamed Shakir saved brilliantly.

Mohamed Shakir then fumbled a simple ball to him and gave an opportunity to R. Santhan who persisted with the defence and slotted in to open the scoring.

25 minutes down Sajid then got a cross for a free header which he managed to head straight at the keeper. Immediately after St. Patrick’s got a chance to increase the lead. Zahira were let off the hook when D.H Hains hit over the cross bar.

St Patrick’s looked the more attacking team in this period of play and kept asking questions from Mohamed Shakir who kept fumbling the ball due to the wet conditions.

Both teams went at each other with attackers from both flanks and through balls. St Patrick’s were the team who got half chances which they failed to capitalize.

Just before the break R. Santhan made a brilliant header from a tight angle after a cross from the right wing went over Mohamed Shakir.

Zahira College were made to pay once again as a through ball from missed possession found D.H Hains away on goal. He slotted in giving Shakir no chance.

Zahira College got a major chance early on in the first half when their forward got the ball on the edge of the 15 yard box, but scuffed the opportunity when he blasted it over the crossbar.

Sahil Ahamed was the next Zahirian to step up when he took a finesse shot from the edge of the 15-yard box, but it curled just wide of the post. Majority of play early in the second half took place around the St. Patrick’s box as Zahira chased their opening goal, with the Zahira faithful stunned into silence.

Santhan failed to complete his hat-trick when he dribbled into the box 1v1 against keeper Shakir, but pressure from the rapidly approaching defender saw him strike wide.

Zahira pulled one back finally after Mohamed Rasheed struck in a curling effort into the box from a set-piece where Mushfir headed it into the back of the net much to the jubilation of their fans, who with that goal, found their voices again.

Zahira built on their momentum after skipper Aakib dribbled past a couple of defenders before he found Hasan Raza, inside the box, who smashed it into the back of the net.

Just few minutes later Aakib got the ball at his feet on the edge of the St. patrick’s box and struck a shot, which with a deflection, beat the goalkeeper into the back of the net to complete a remarkable comeback backed with an uproar of delight from the Zahira faithful.

St. Patrick’s missed a golden opportunity to steal a late winner after keeper Shakir denied the initial effort after which the powerful header by the St. Patrick’s player came crashing back off the crossbar.

After a stunning comeback it was down to penalties and Hasan Raza and D.H. Hains both calmly slotted away the opening penalties for their sides. Goalkeeper R. Kijuman was outstanding however as he made two crucial saves off the spot-kicks of Sahil Ahamed and Hasan Riza, while also diving the right way for every other penalty despite not managing to keep them out.

Mohamed Mushfir, Mohamed Aakib and Mohamed Murshid all converted for Zahira, but it was not enough. St. Patrick’s hero of the first half, Santhan skied his penalty, but N. Baviraj, R. Dilakshan, Rubert Thanujan and A. Preeshan, who took the winning penalty, ensured St. Patrick’s a spot in the TPFC 2018 Semi-Finals.